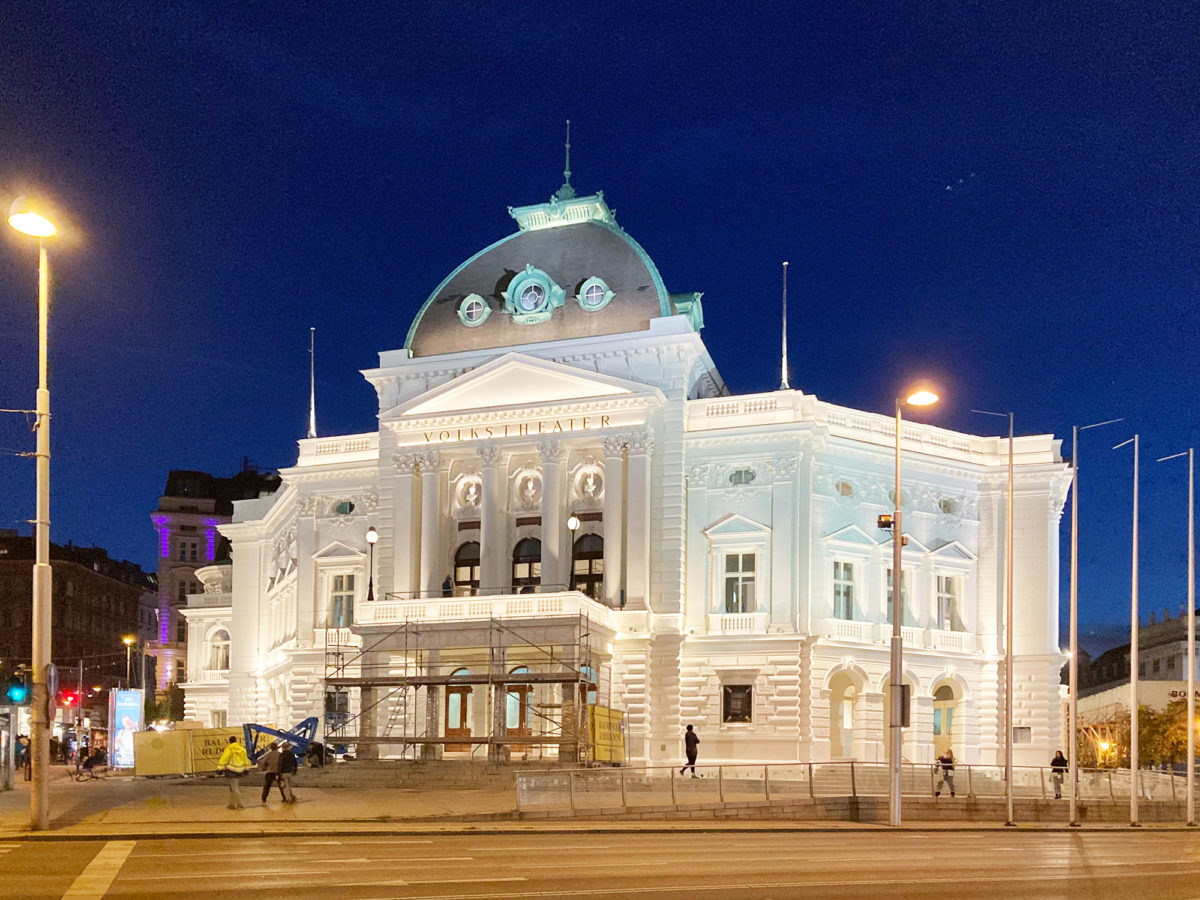 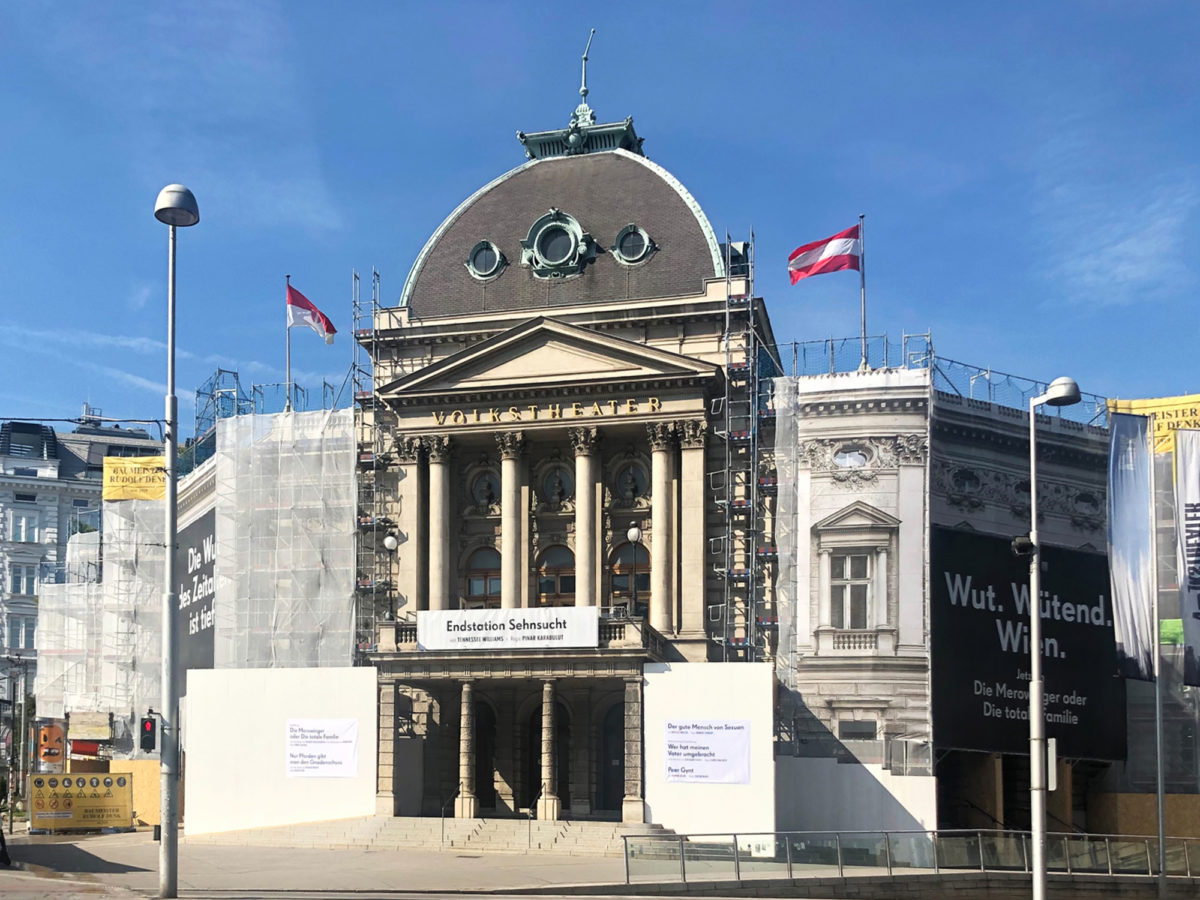 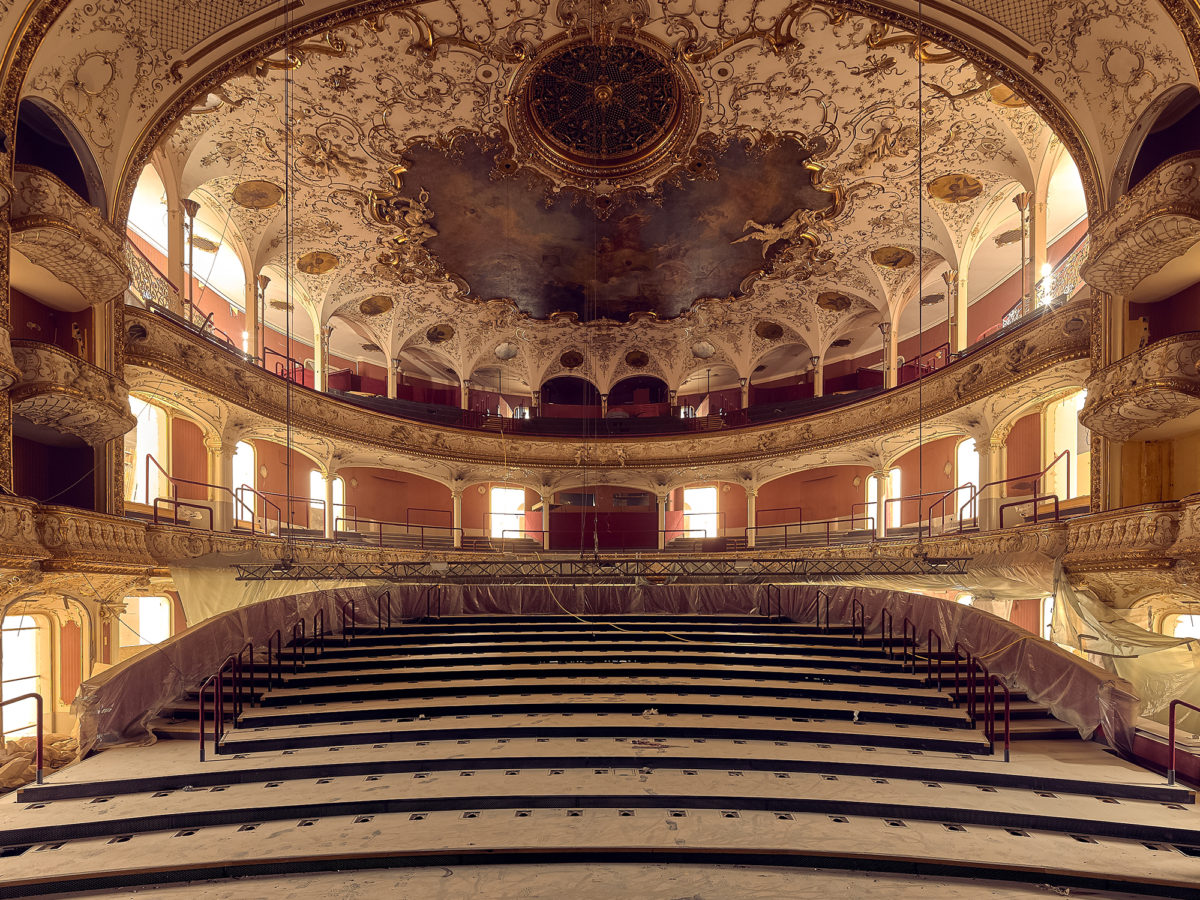 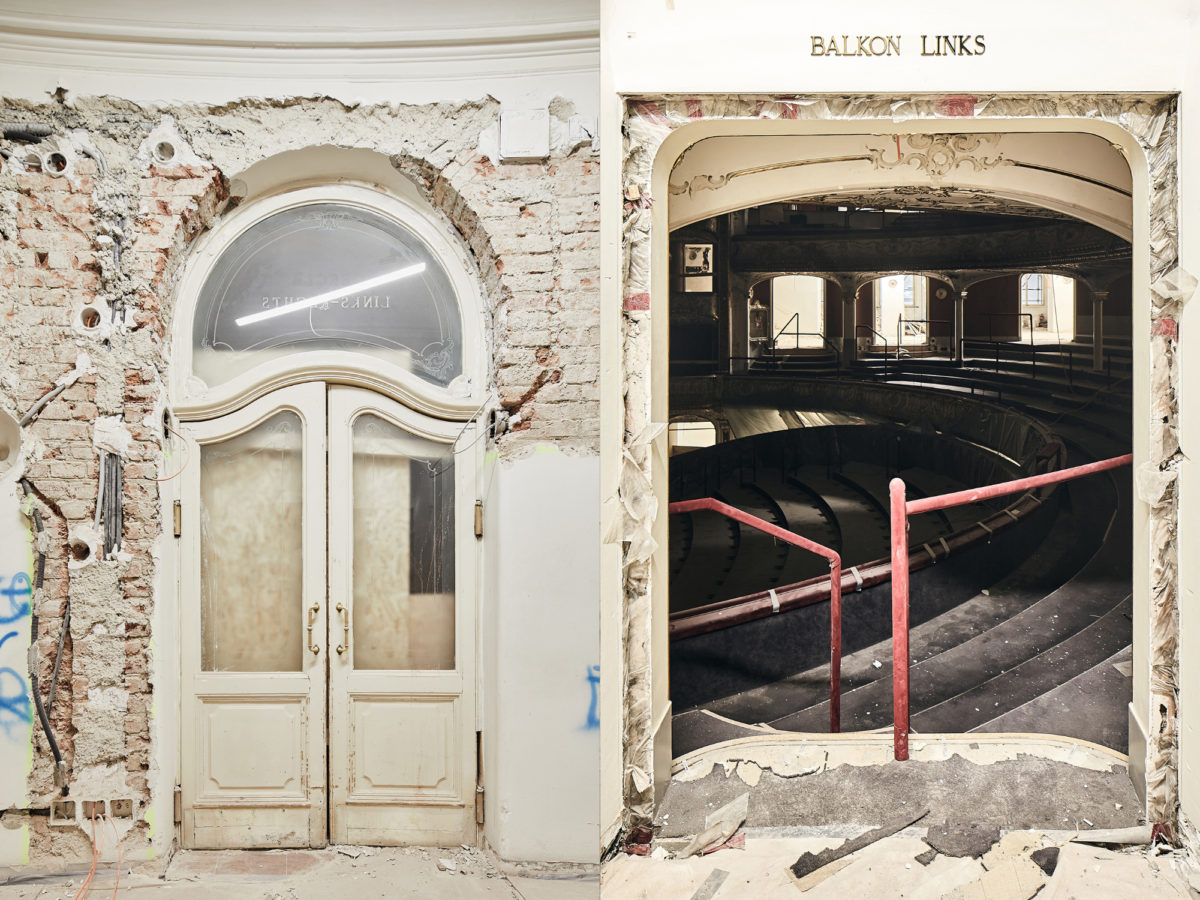 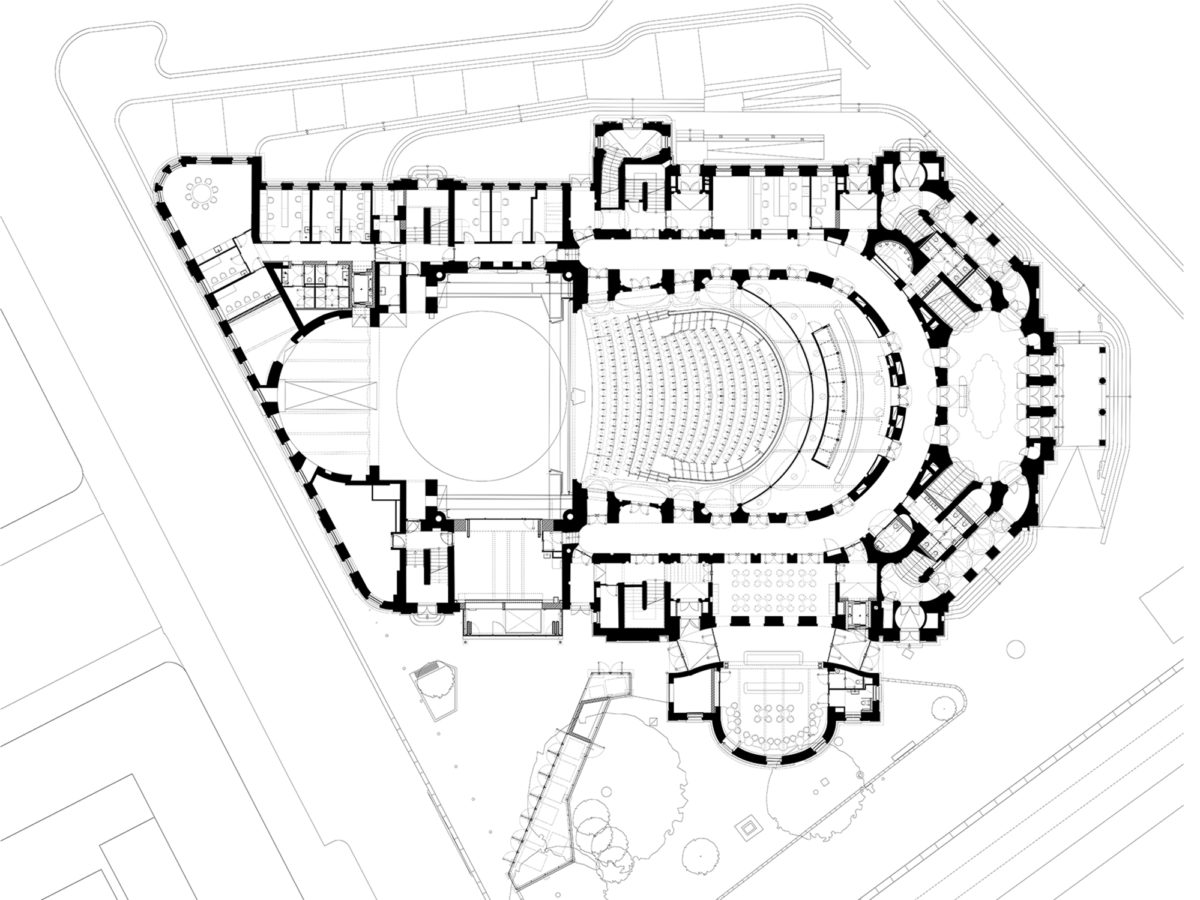 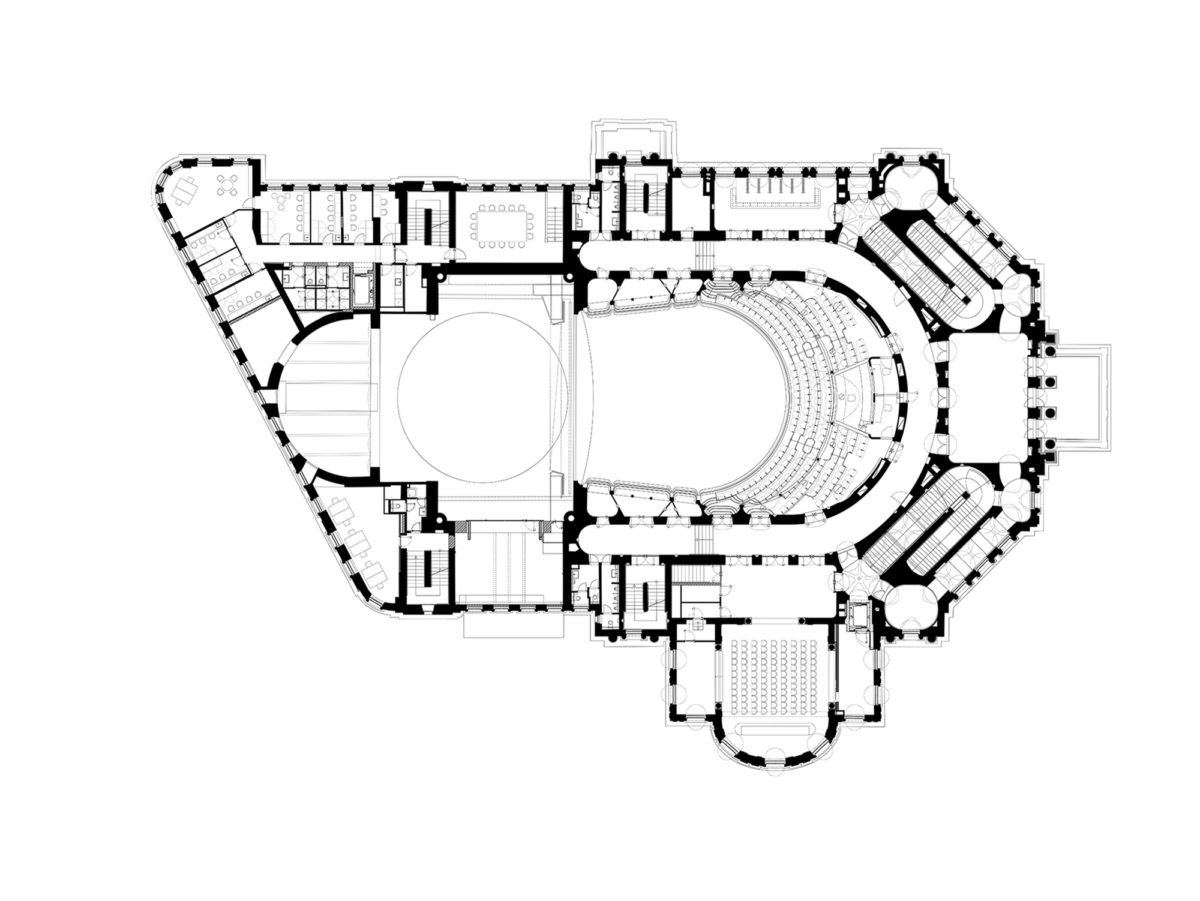 In summer 2016, we were awarded the contract for the general renovation of the Vienna Volkstheater in a joint bid with FCP Fritsch, Chiari & Partner and Alexander van der Donk. Built in 1889 in neo-Renaissance style, the theatre offers 850 seats and the famous Red Salon.
The aim of the urgently needed renovation and conversion was to offer the audience contemporary comfort, to establish modern safety standards and to improve economic efficiency. The entire listed building stock and thus the original character were preserved.

Stage wing
In order to optimise internal processes, we have reorganised and partially converted the rooms in the stage wing. A small extension with a lifting platform now ensures level delivery to the stage. Together with the new side stage and the large marshalling area in front of it, this new structuring enables a smooth process for delivery, set-up and changeover. The artists’ dressing rooms are located in the north-western part of the building and have their own access.

Spectator area
The rooms in the visitors’ section were also reorganised. The Red Salon can now be used independently of the main building.The new café on the ground floor with its information point and garden in front of it forms an inviting extended foyer. We have combined the previously decentralised public cloakrooms on the ground floor into a central cloakroom whose new, clear design interacts confidently yet sensitively with the historic building.

Lighting & Facade
We paid special attention to the renewal of the lighting. The wall candelabra on the columns under the balcony and tier, the light in the boxes and the central illumination of the theatre hall were restored and supplemented according to historical plans. The façade lighting makes the new old splendour of the house visible on the outside as well. To improve the thermal quality, the theatre’s richly structured plaster façade was cleaned and renovated in agreement with the Federal Office for the Protection of Monuments. The partially leaking flat roofs, roof terraces and domes were also repaired and re-roofed.
Even if you can no longer see much of the work that has been done, you can feel it everywhere in the building and it will give pleasure to staff and visitors for a long time to come.