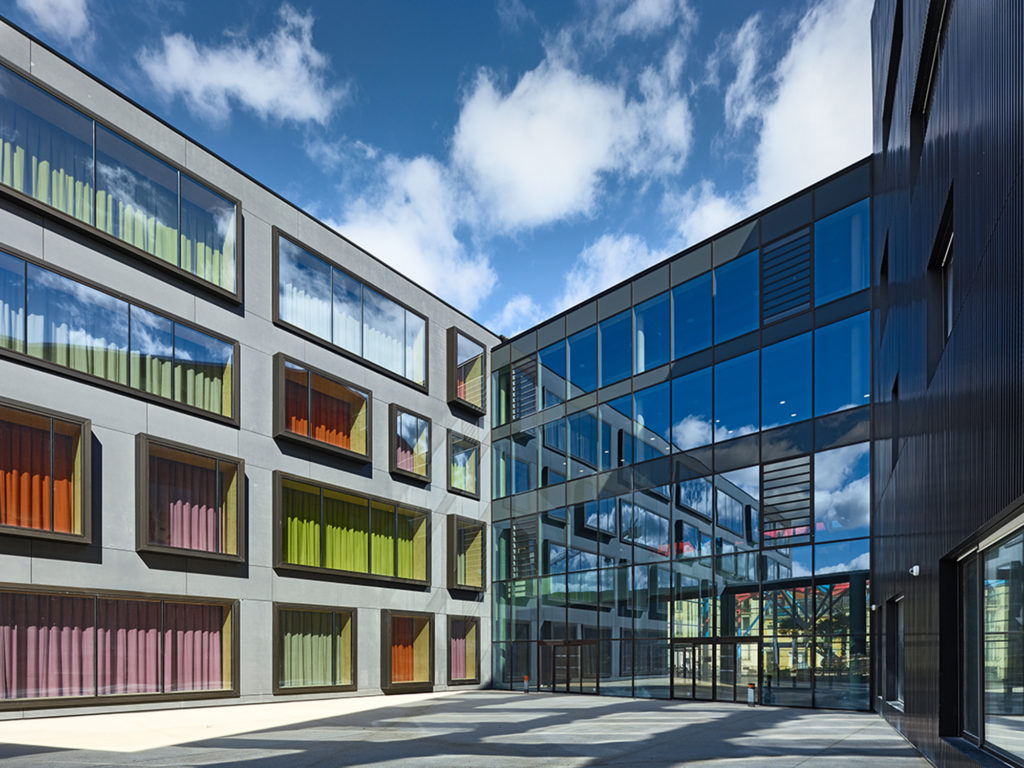 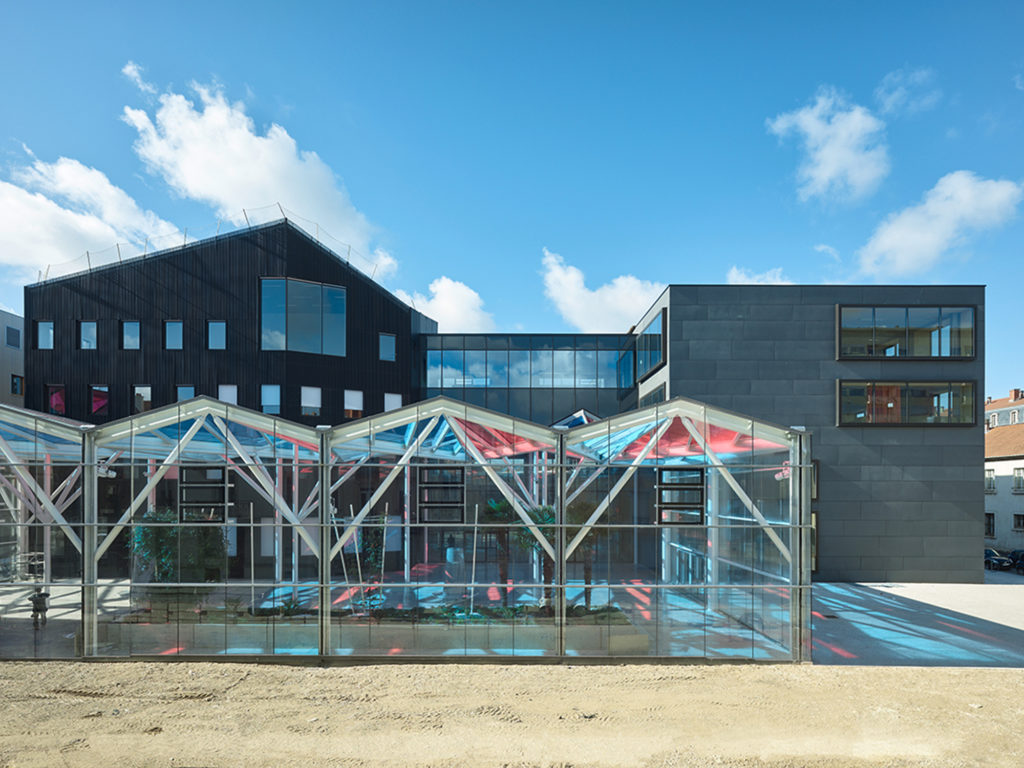 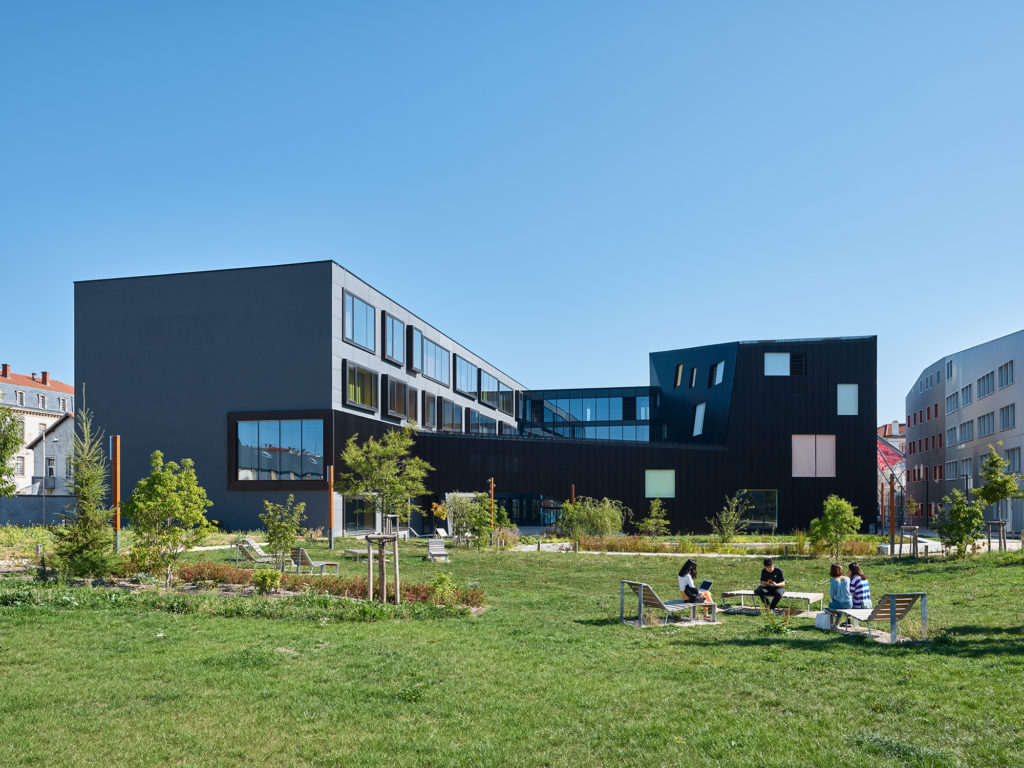 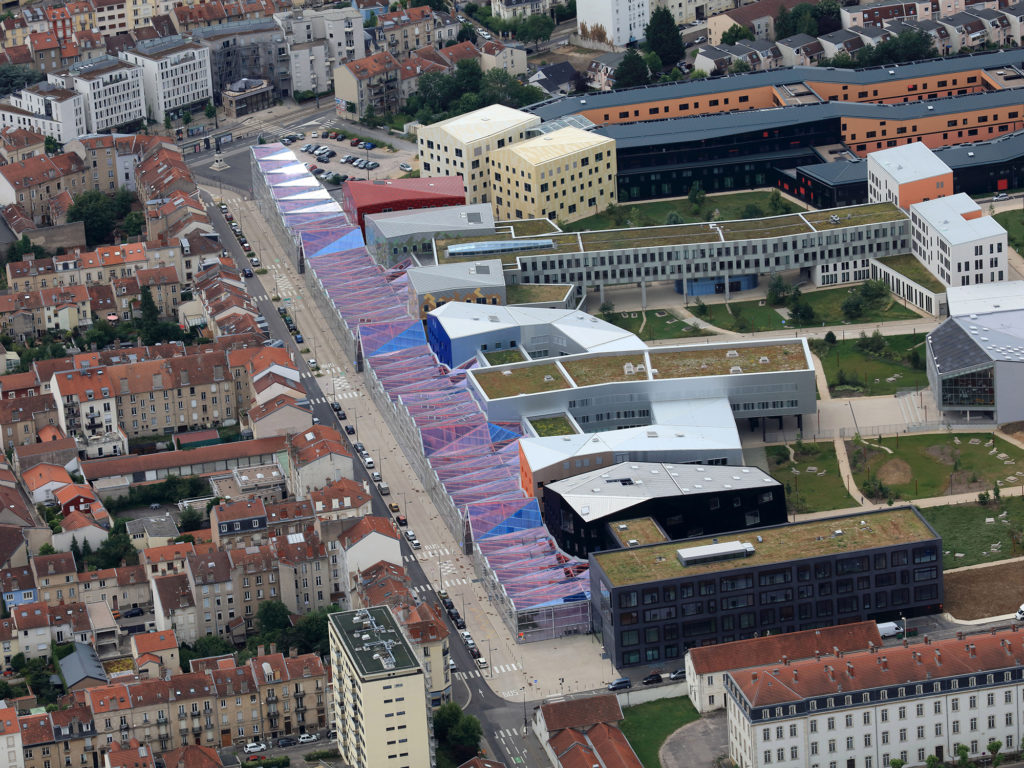 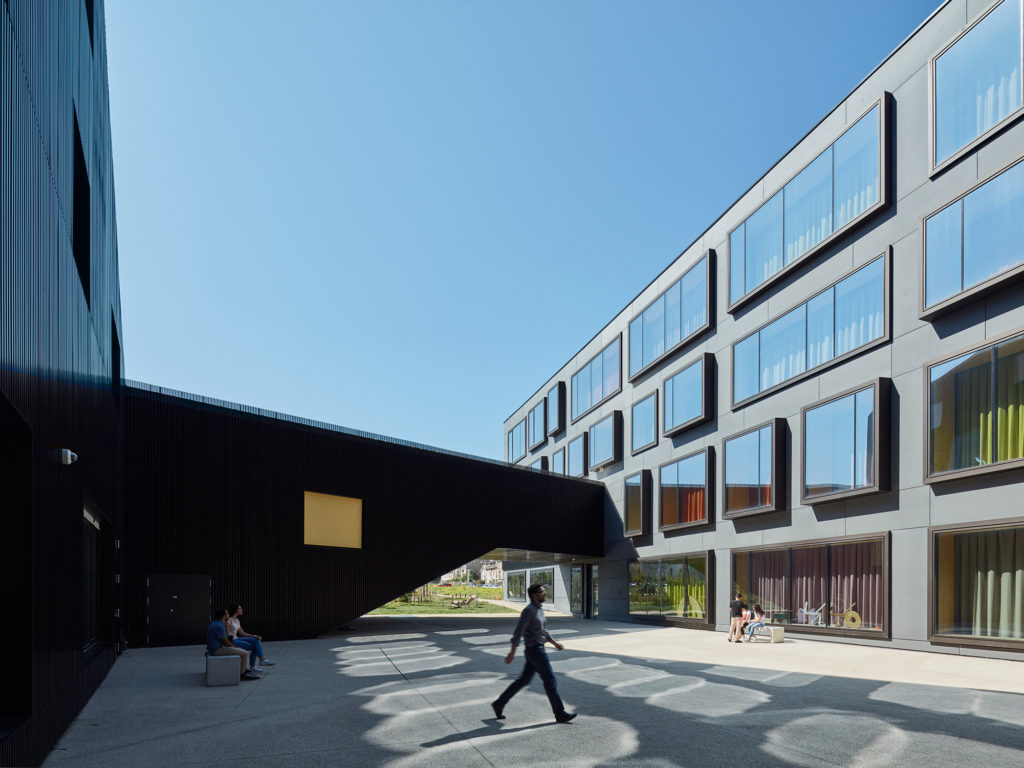 The ENSAD art school is part of the new ARTEM University campus – the largest new university complex in France – where the disciplines of Art, Technology and Management are brought together in a cohesive urban composition. Guided by the campus master plan, inspired by the geometry of the site and its specific urban position, the art school occupies the northern edge of the university campus in an iconic complex of two separate buildings. The four-story, parallelepiped Vauban building, and the five-story, polyhedron ›Signature building‹, are connected by two glass structures forming an inner courtyard. Behind it, the campus park unfolds.

Nicolas Michelin has drawn up the master plan for the ARTEM campus on the site of the former Molitor barracks: A 300 meters long steel and glass gallery acts as an interface to the city and connects the individual universities, which – according to the master plan – each consists of two main sections. One of them is to be designed with an iconic gable roof as the “maison-signe”, the emblem of the university building. Michelins combination of a small-scale structured row of buildings and a connecting major form reacts to the urban scale – the opposite buildings are narrow, three to four story townhouses typical of Nancy. Our building for the University of Art and Design interprets the constraints of the master plan for the ARTEM university campus in a very individual way and consequently places a calming accent at the end of a colorful row. To contrast the other colorful buildings, the ENSAD shows an anthracite envelope that harmonizes well with the slate roofs of the neighboring barracks.

The clear spatial organization gets obvious as soon as you enter the building.

The lower Vauban building houses workshops and a two-story studio for video and photography.

A glazed structure with a two-story entrance hall and a cafeteria on the upper floor connects the two wings.

The partly elevated transverse auditorium on the west side defines an inner courtyard and provides a connection to the park behind.

In spite of their different external appearance, the load-bearing structure of the two buildings is identical: The offices and workshops, divided up by plasterboard partitions, are grouped around a core of exposed reinforced concrete that incorporates the vertical circulation, sanitary spaces and building services. 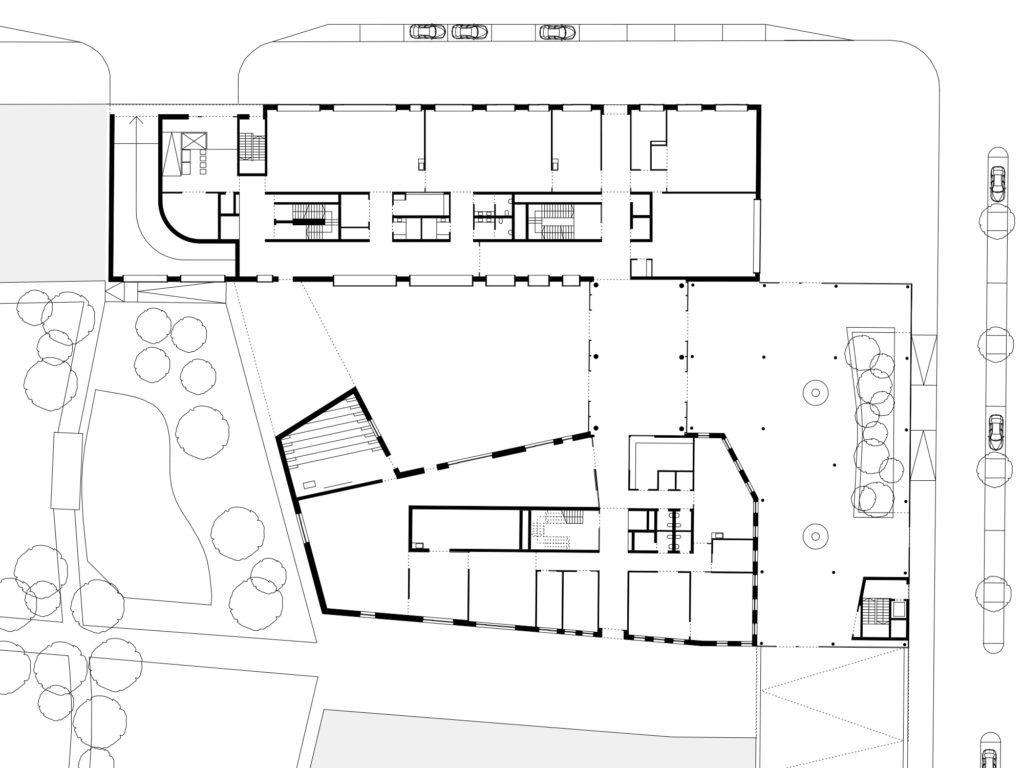 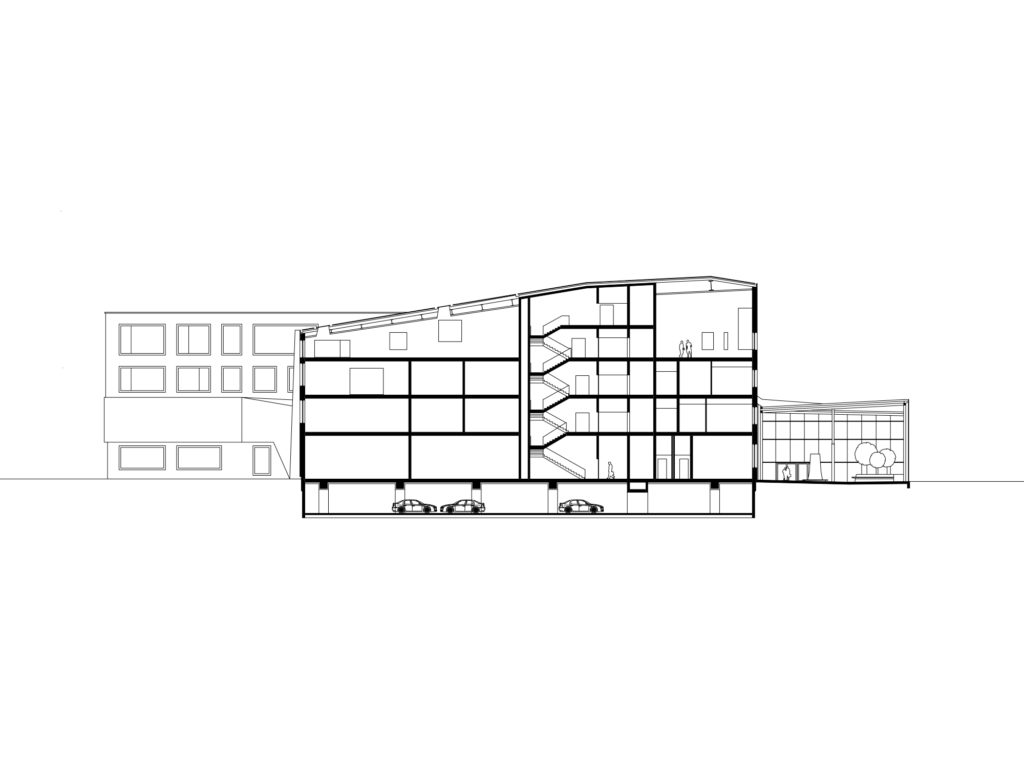 The outward appearance of the two structures is fundamentally different: The “signature building” is facetted like a crystal and has a shell made from trapezoidal perforated anodized aluminium. The irregularly arranged windows are a result of the different ceiling heights; however, they also follow the logic of twisting the building’s polyhedron shape into a crystalline form 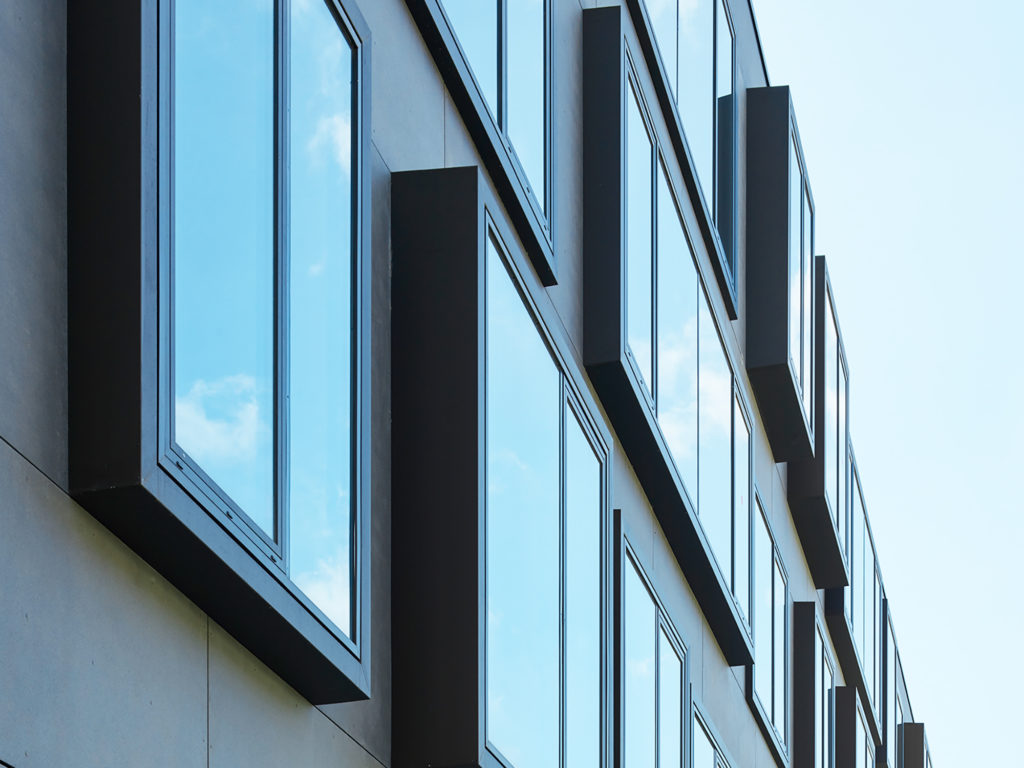 The monolithic parallelepiped façade of the Vauban building is clad with fiberglass-reinforced concrete panels. Large projecting bay windows give the façade its sculptural quality. Colorful curtains set attractive accents on the courtyard side. 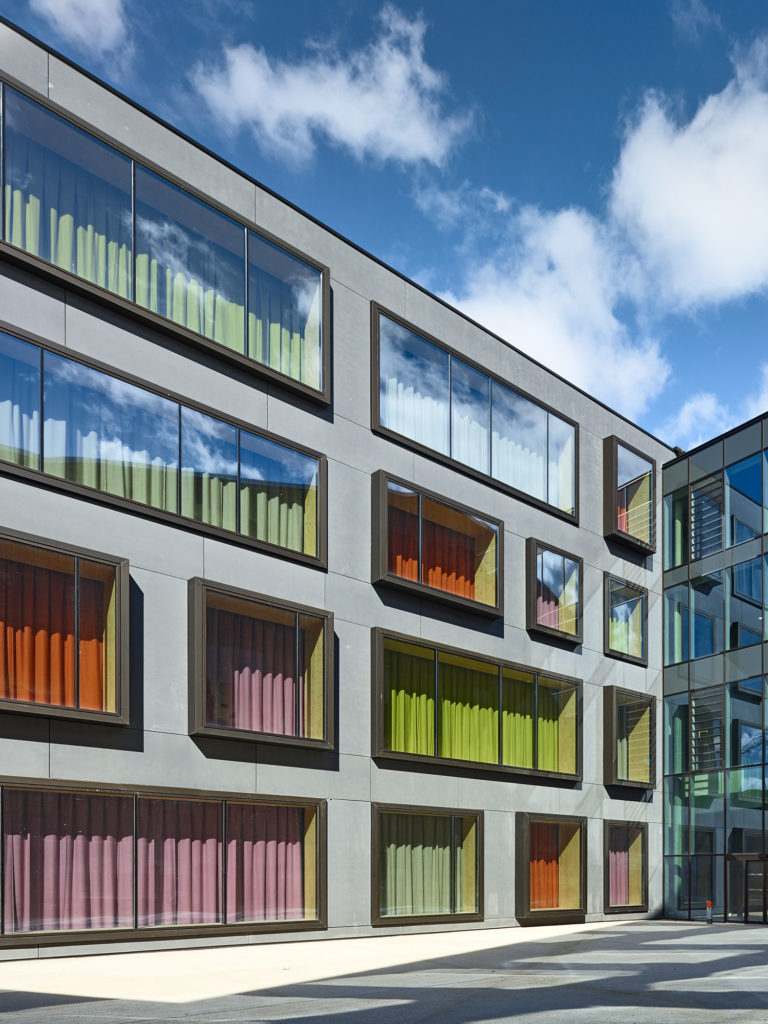 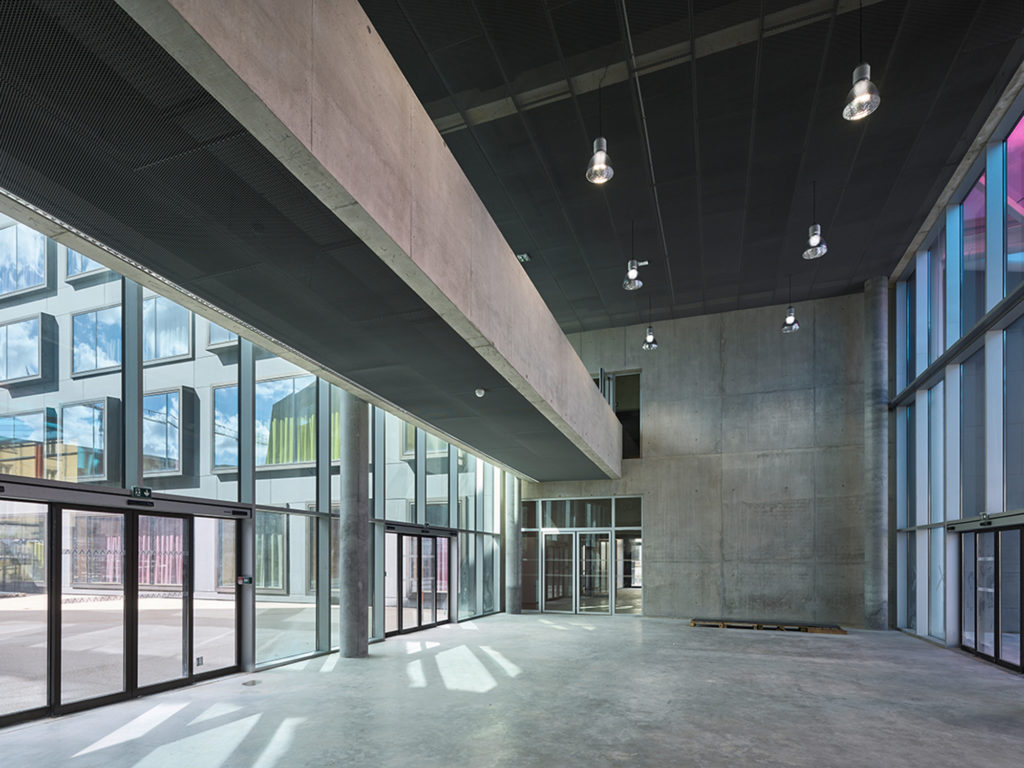 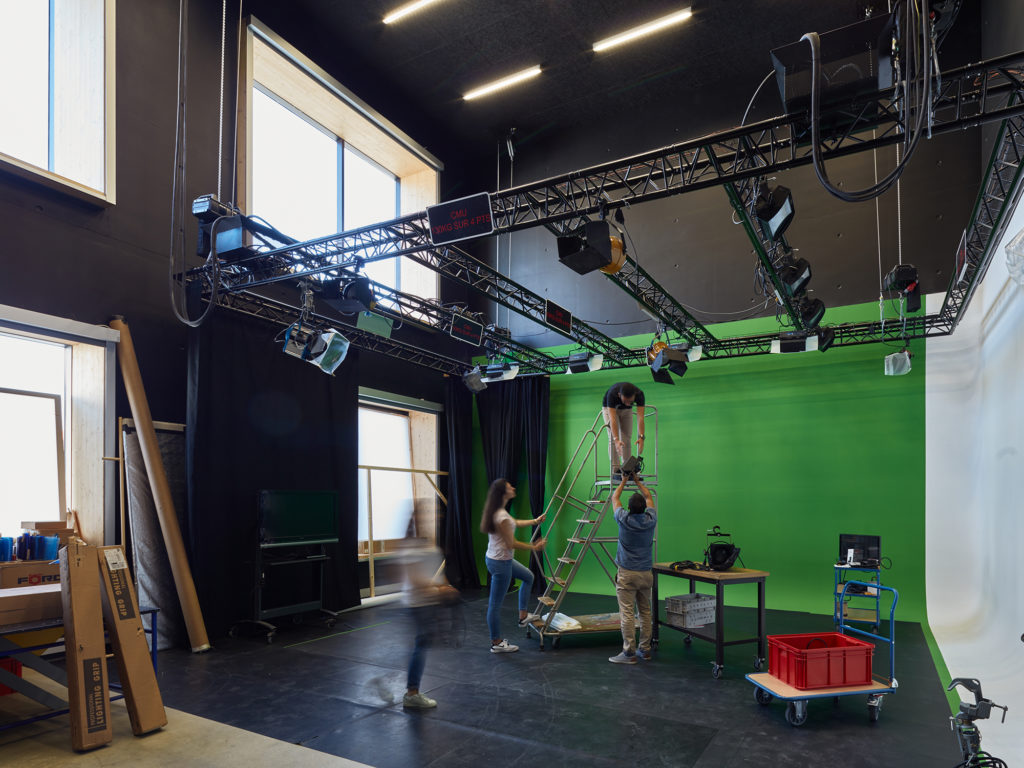 Although it looks very compact from the outside, the interior of the art school is spacious and generous. Raw materials – exposed concrete, white surfaces, steel, wood, expanded metal or wood wool panels for sound absorption – in well-lit rooms create a solid, stimulating backdrop for artistic work.

The different floor heights in the two buildings ensure varied spatial experiences. These spaces range from three and a half to four meters high in the studio wing, where the photo studio with its void even extends over two floors and measures up to six meters in the top-lit hall in the attic of the “maison-signe”. 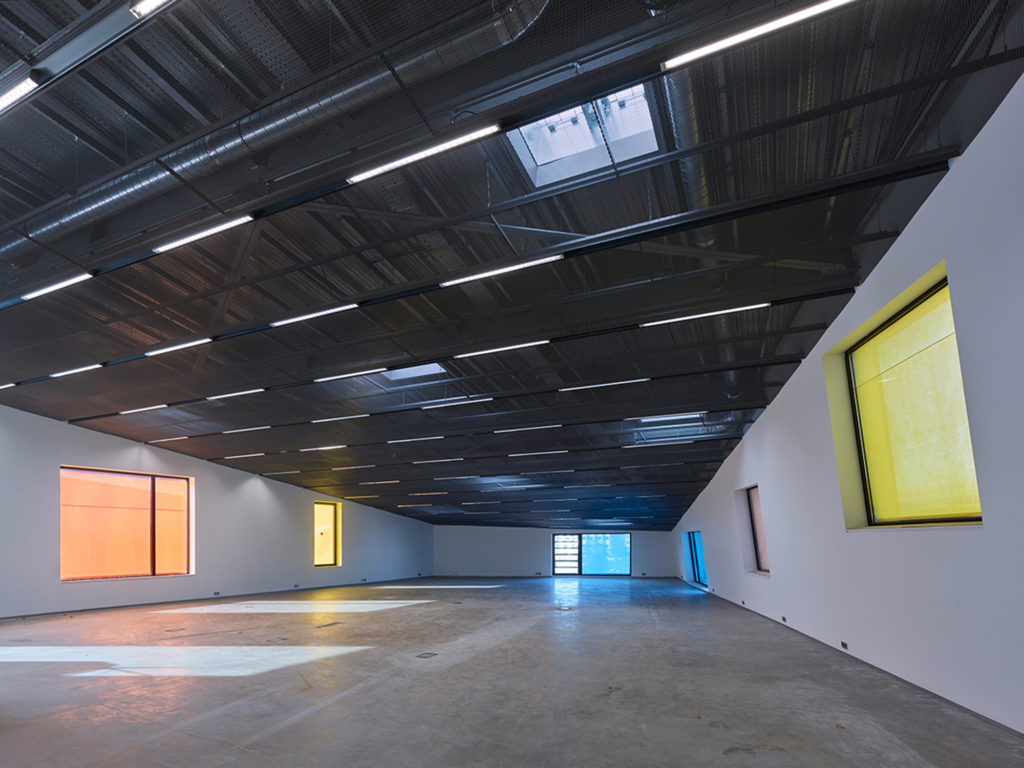 The spacious skylight hall in the Vauban building 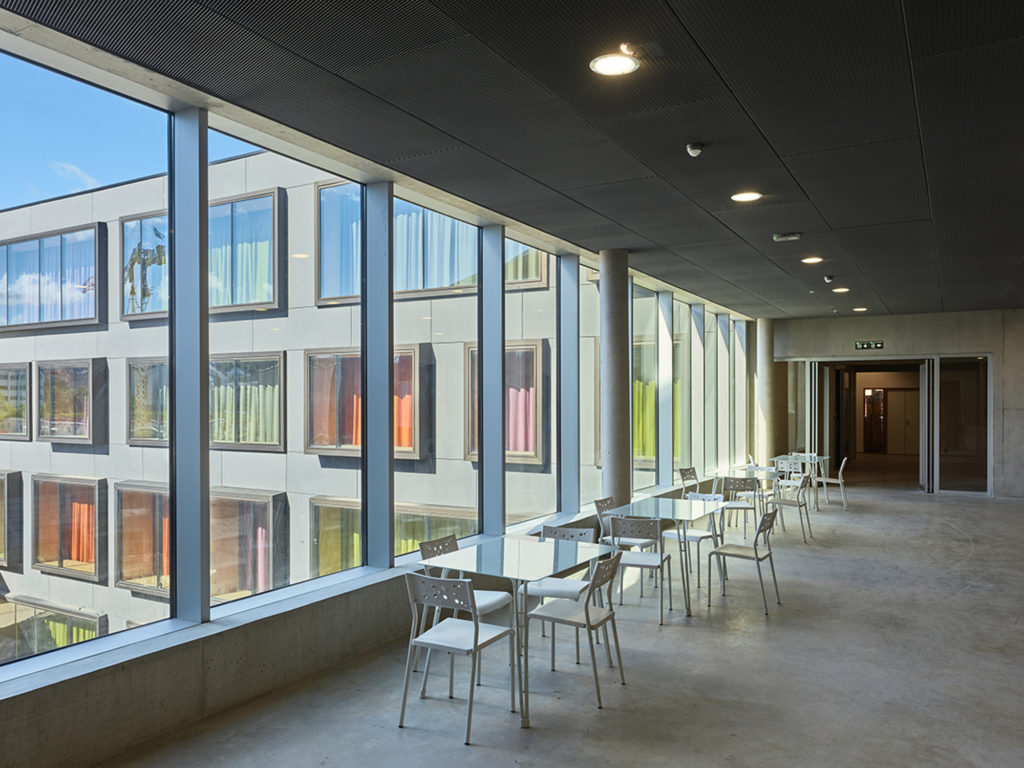 The cafeteria on the upper floor of the connecting wing 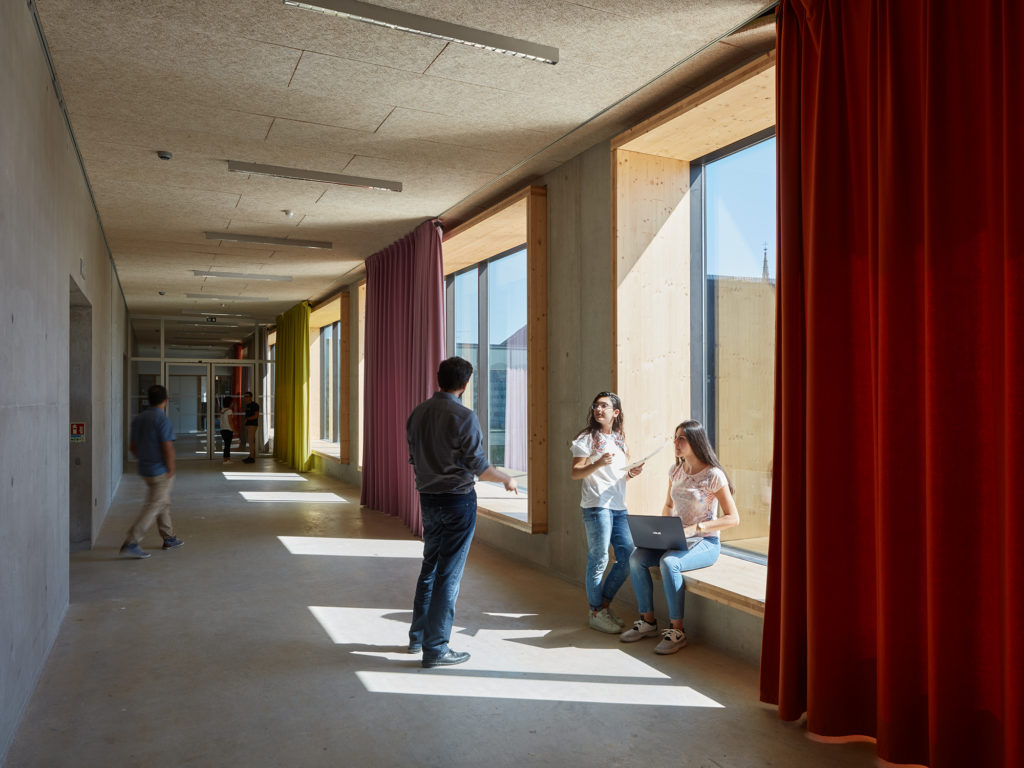 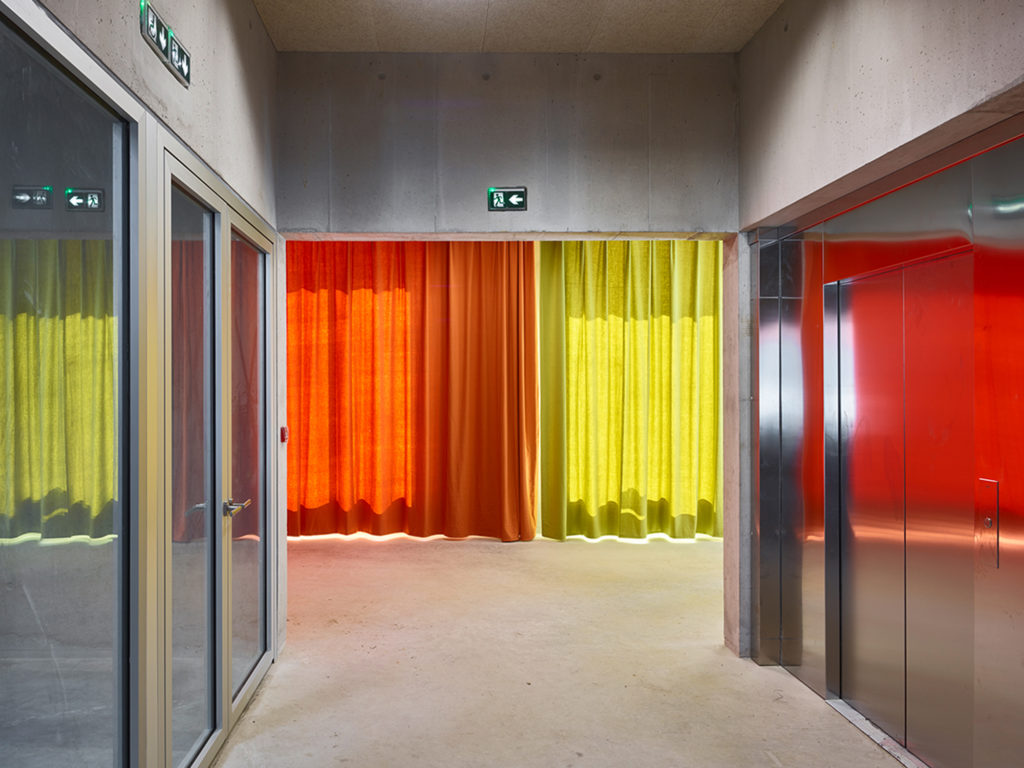 The access corridors on the courtyard side are conceived as light-flooded, bright lounges that can also be used for exhibitions. They open onto the inner courtyard with large windows whose deep glulam soffits form attractive seating niches inside. Heavy felt curtains in powerful shades place tactile, soft, colorful accents and improve acoustics.
Back to overview
Our website uses cookies to improve your experience. By continuing to browse the site, you are agreeing to the use of cookies. For more details, see our data protection.OK