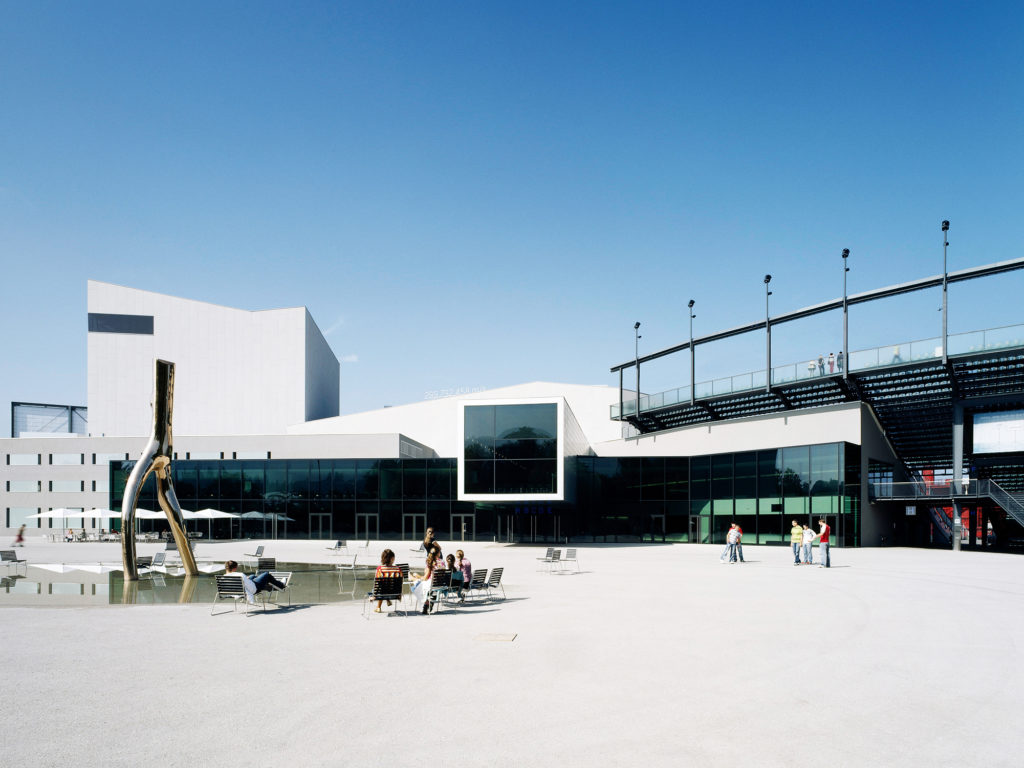 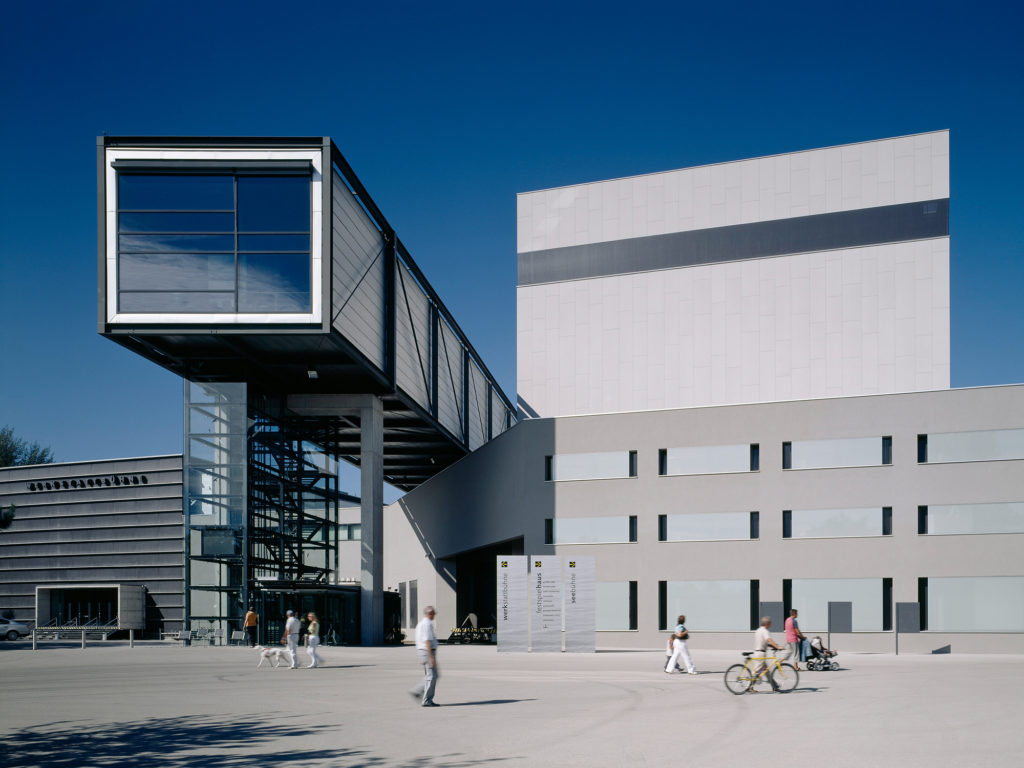 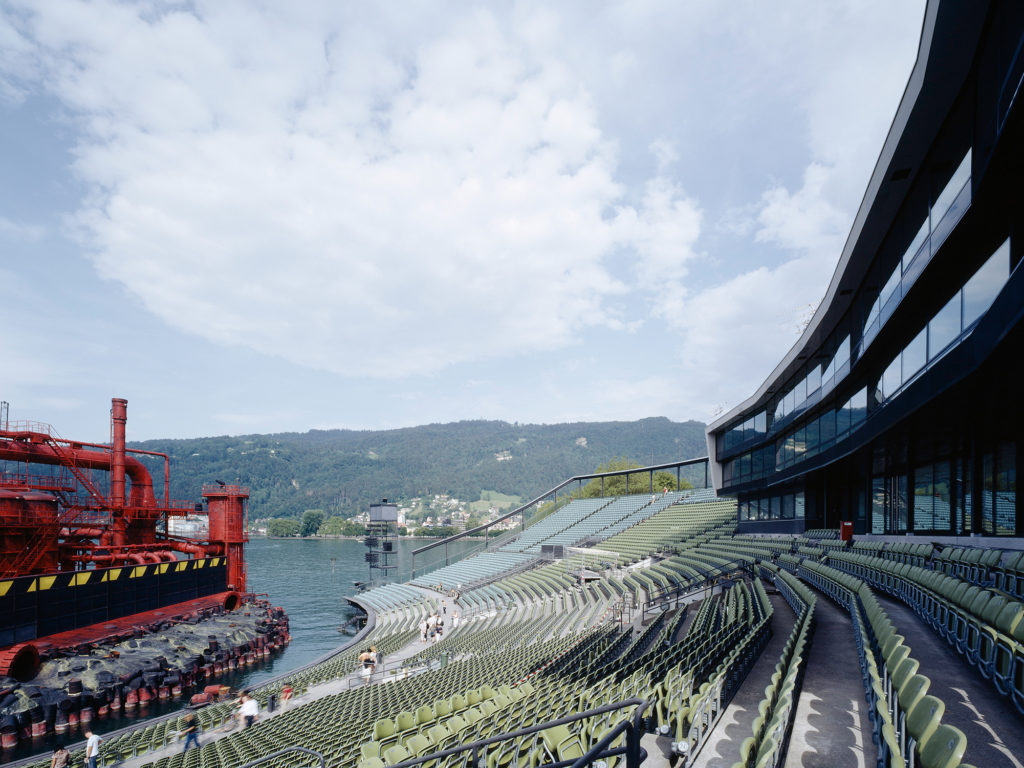 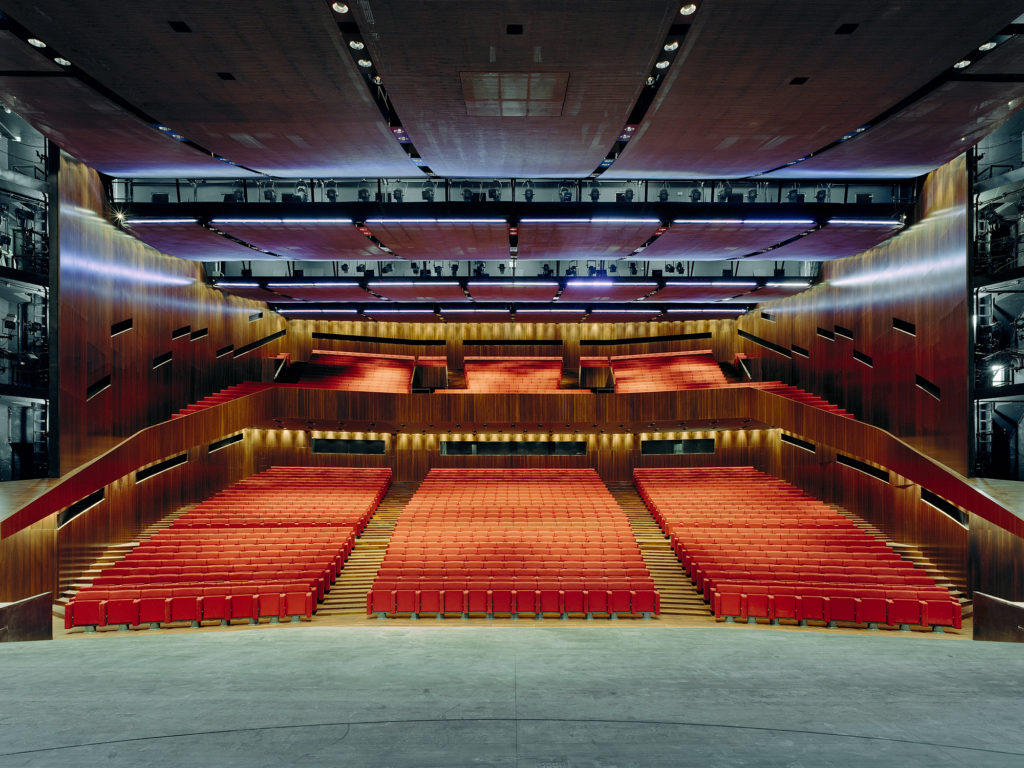 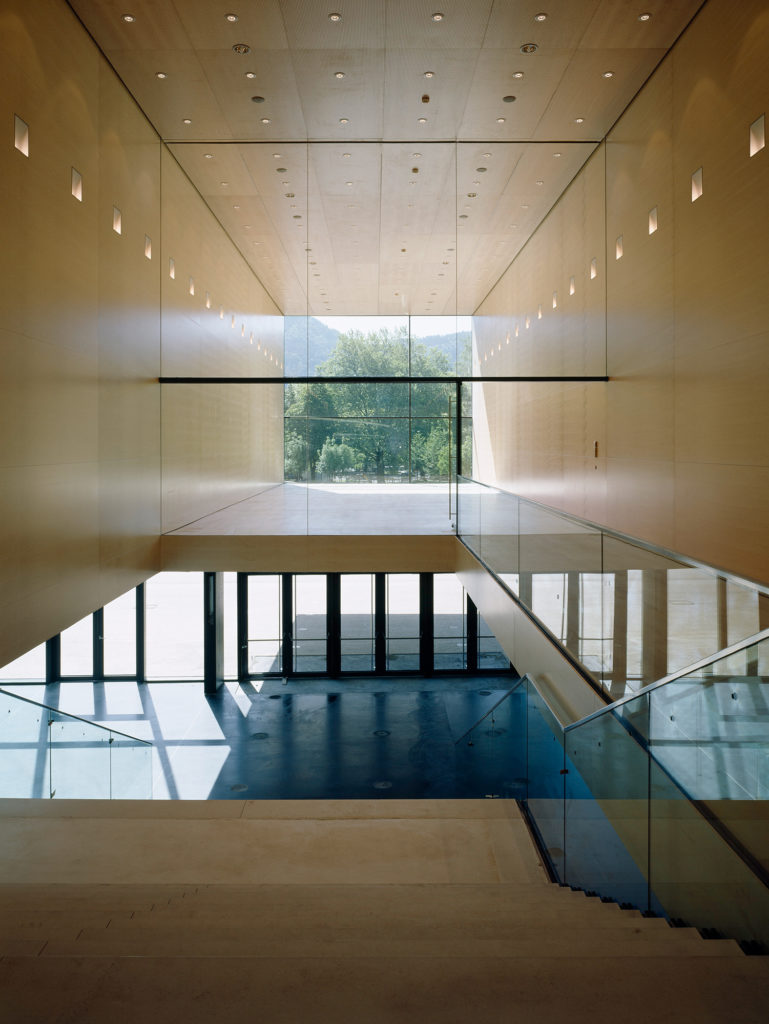 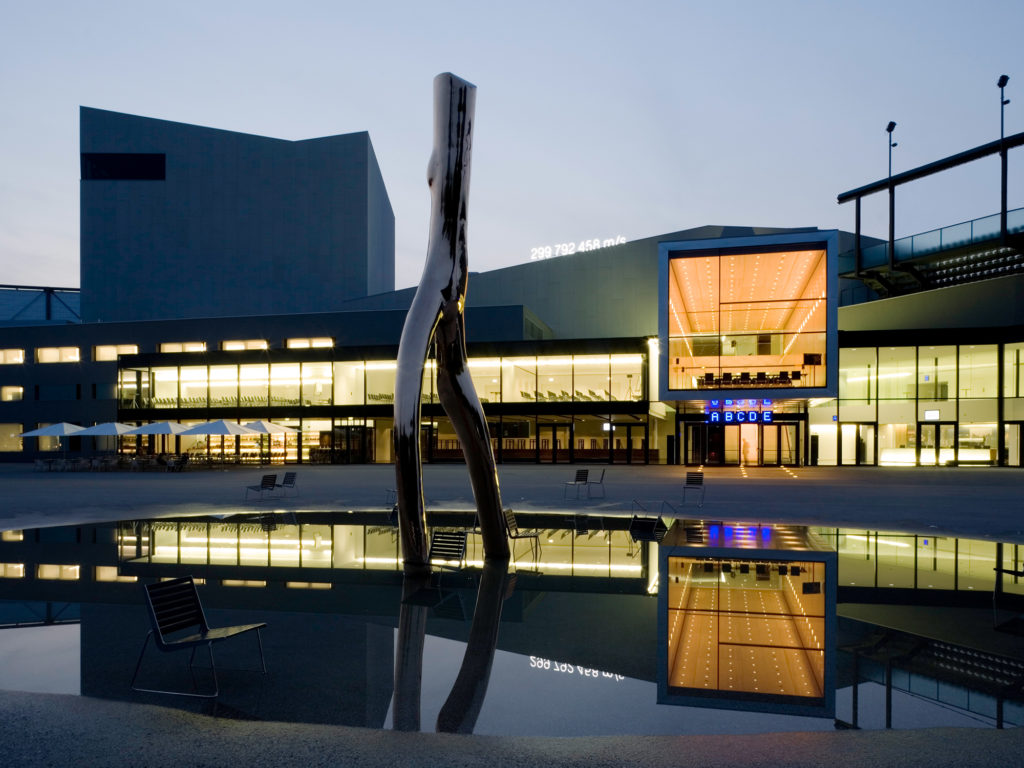 This complex project updated and expanded the renowned Festspielhaus on Lake Constance, trans-forming it into a multi-use cultural, social and business center of international repute. Extensive pre-design and prefabrication were required prior to a decade of profound transformation without interrupting performances or institutional operations. Bregenz Festspielhaus has been voted the best and most sustainable event center for its size in Austria, the best in Europe and is among the three best in the world.

The original building design, dating from 1979, was characterized by a forbidding structure. The extension and transformation into a multi-use, inviting complex is not a mere play of forms, but rather approaches complex operational problems with a sophisticated solution. The two striking large columnar elements of the building structure the spacious unit in three central areas: Studios and workshops, the Great Hall and the Lakeside Stage. The revitalized complex engages its varied contexts with different expressions on all sides. At the main façade a new public square with an emblematic bronze sculpture by Gottfried Bechtold offers direct seaside views. 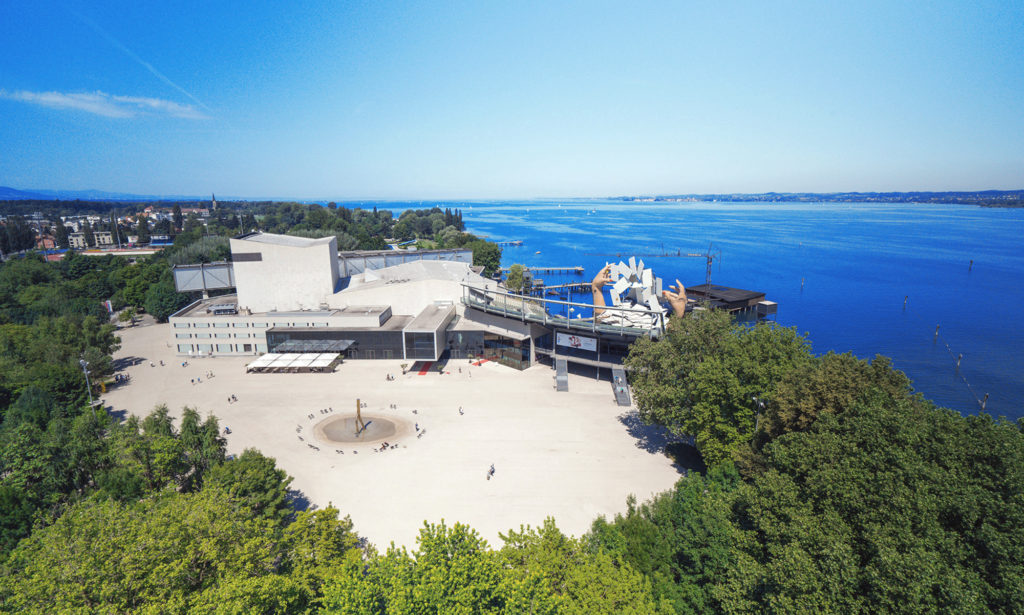 Located on the waterfront in Bregenz, the Festspielhaus, refurbished and extended in several stages, boasts a multi-use event and convention centre with exclusive architecture. The four sculptural shapes give the lakefront setting a strikingly distinct character and provide the site next to the access front with an urban flair. The Festspielhaus has become a landmark attracting from afar whilst offering impressive views on local mountains and the Lake Constrance.

This functional separation in Workshop Stage, Great Hall und Lakeside Stage shapes each part of the building distinctly: The access front is prominent and sparks interest; the side elevations associated to the plaza and entrance are inviting; the lakefront is not only dominated by audience stands but also by the building itself; it is diffident compared to the park next door and appears rather unostentatious than reserved.

We conceived the floor plan of the new Bregenz Festival House like a miniature city. Within two stages, the old structure was transformed into a sculptural building, using collages of different building sections and newly constructed internal axes. The main elements are two elongated prisms that strengthen and increase internal connections. 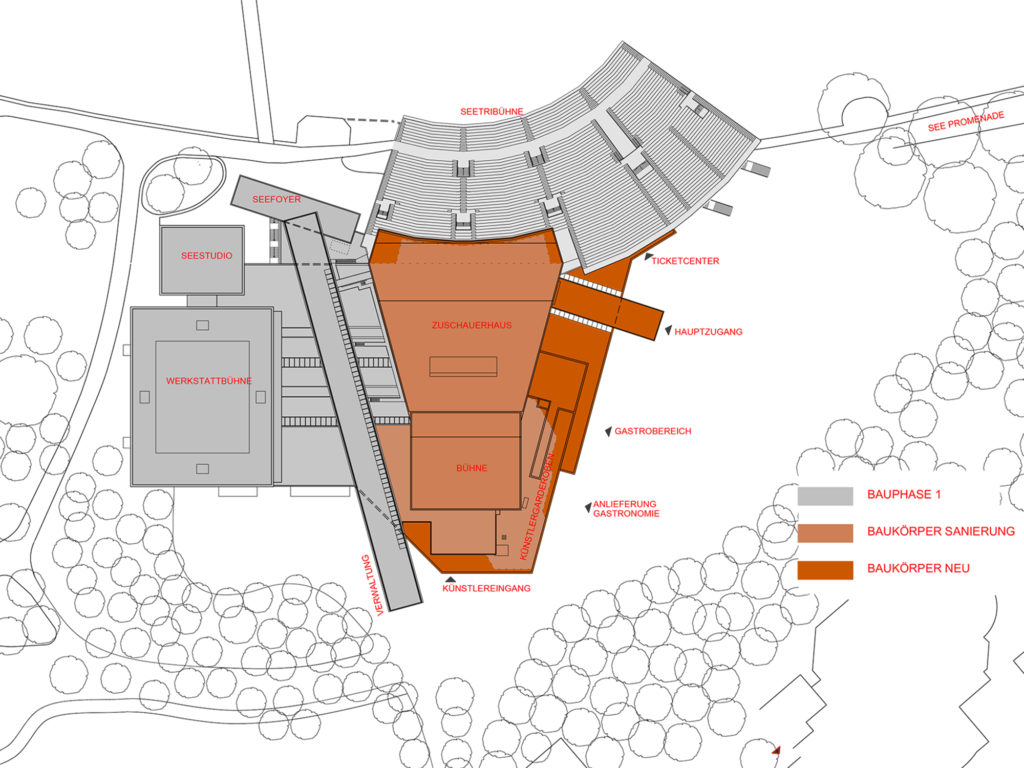 The long, highly stilted, two-story supporting structure on the rear side contains offices for administration and production. Important, spacious cross-connections were created underneath. From below, the glass lift tower slides into the room prism. 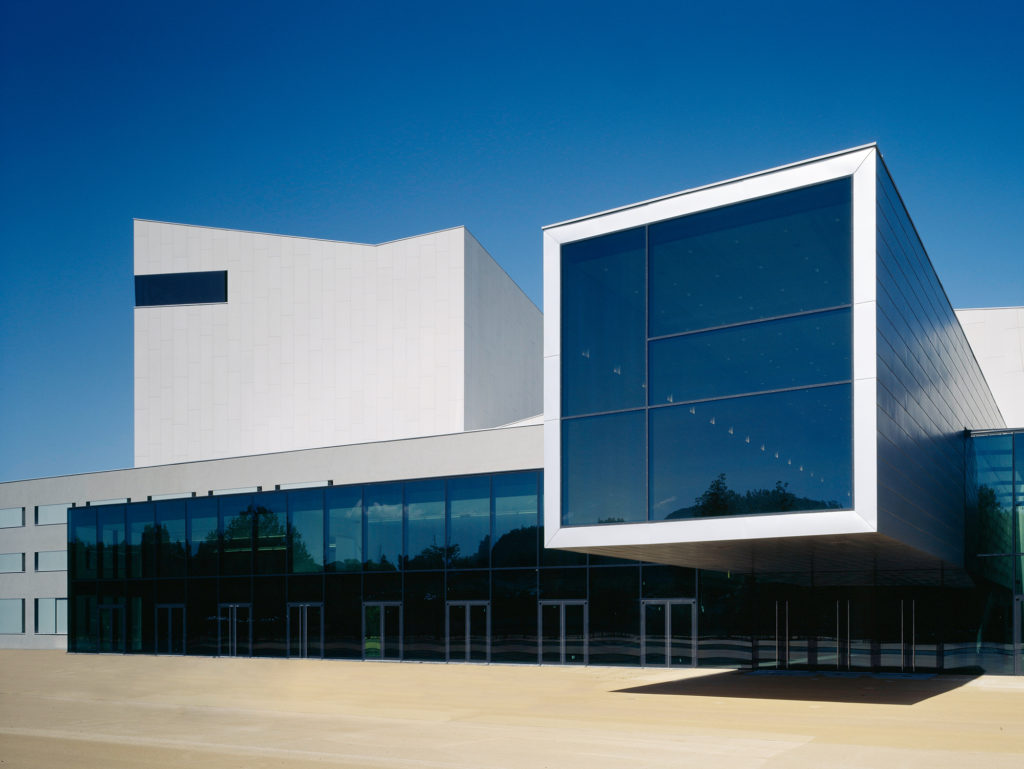 In the second expansion phase, we inserted a similarly dimensioned long prism between the main audi-torium and the expanded lakeside amphitheater, which opens up all performance venues. At the front, it protrudes far beyond the main entrance with the two-story multi-purpose hall "Propter Homines". 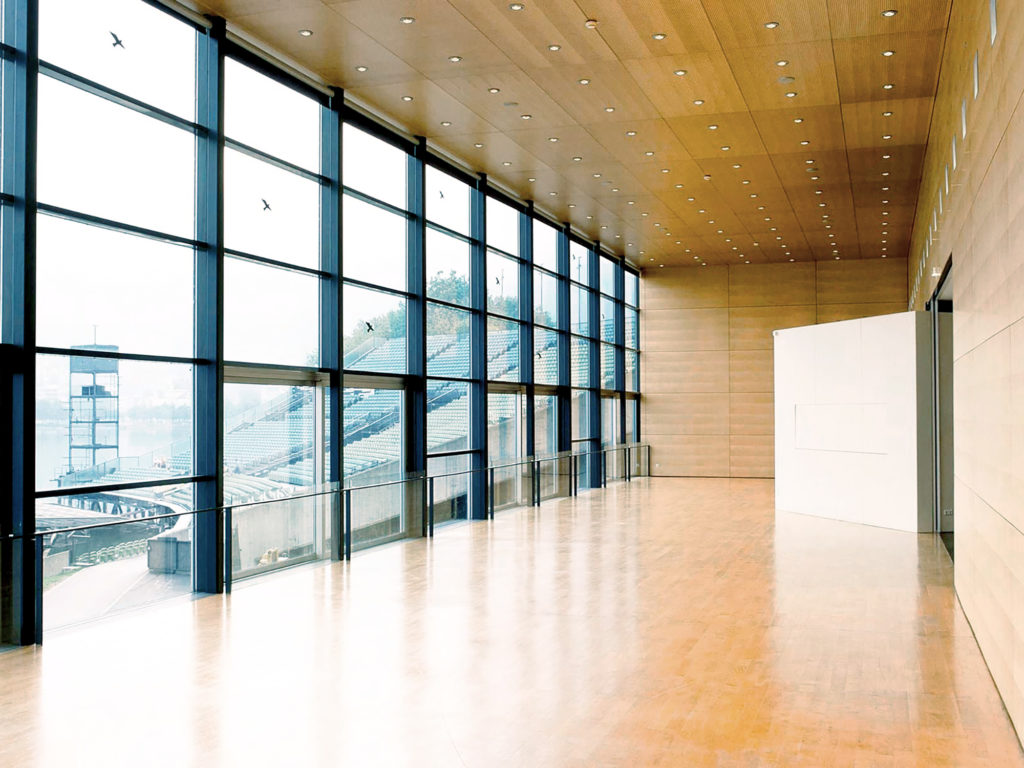 The “Propter Homines-Saal” opens onto the square with the glazed front and is completely clad in Canadian maple wood like a precious wood casket.

The Seefoyer, whose name refers to the spectacular lake and mountain views through a wide glass façade, is located at the rear end of the building. 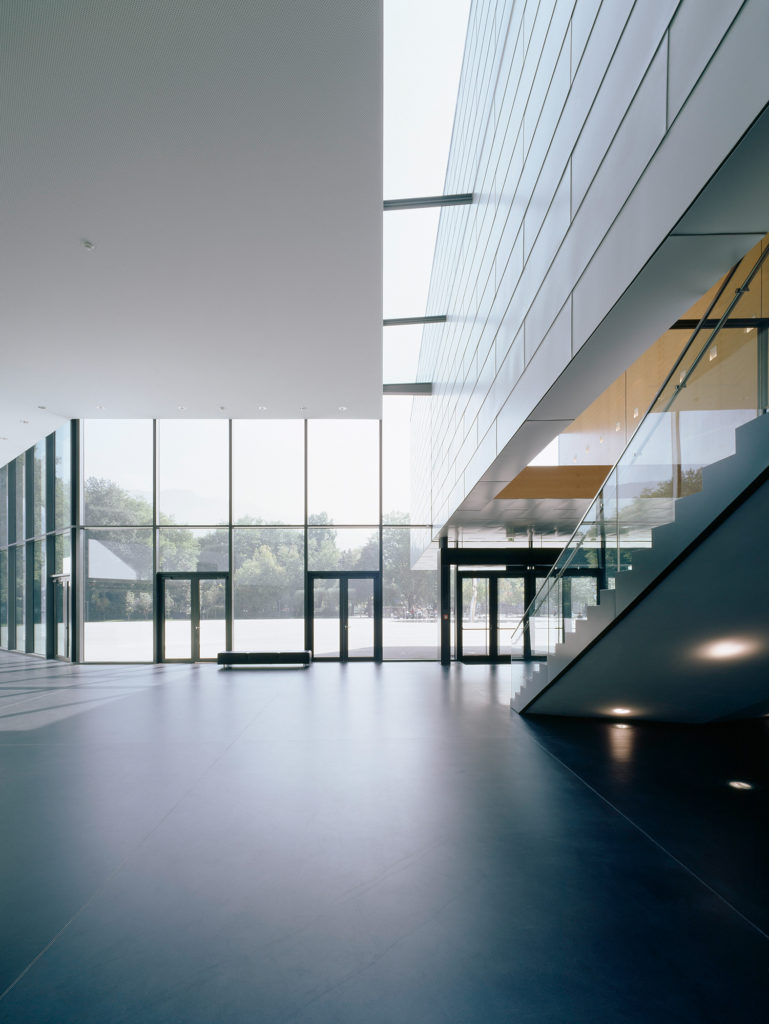 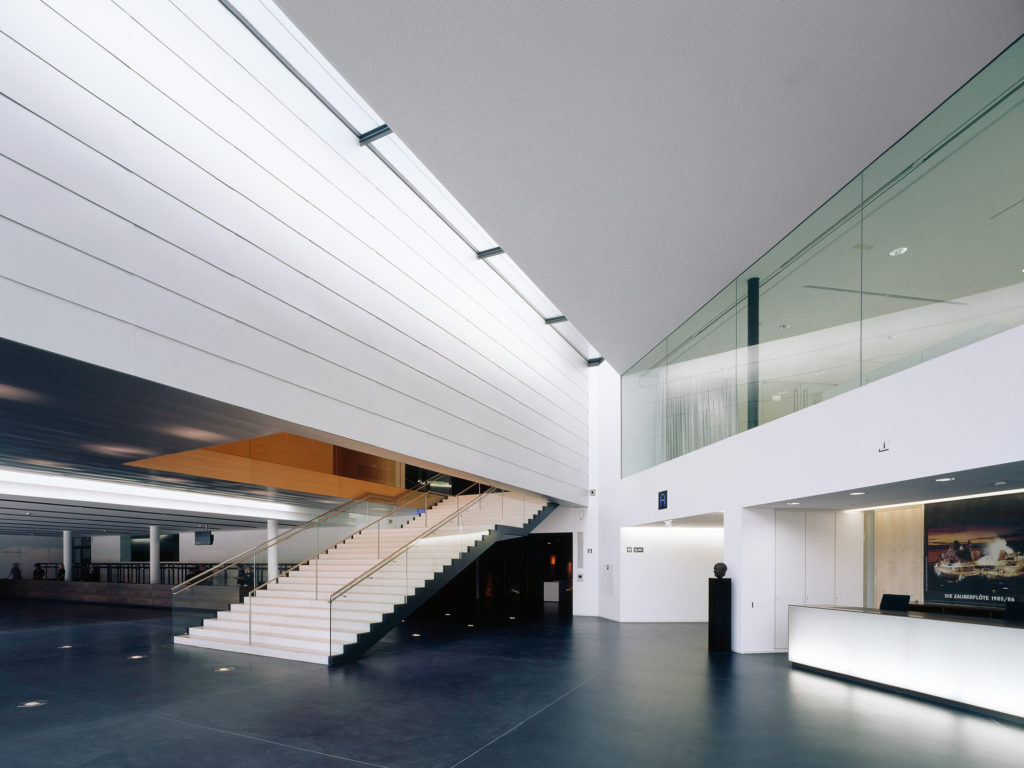 The wide main staircase leads like a gangway from the exposed prism structure to the plaza. The ticket counter and cloakrooms are located here as well. 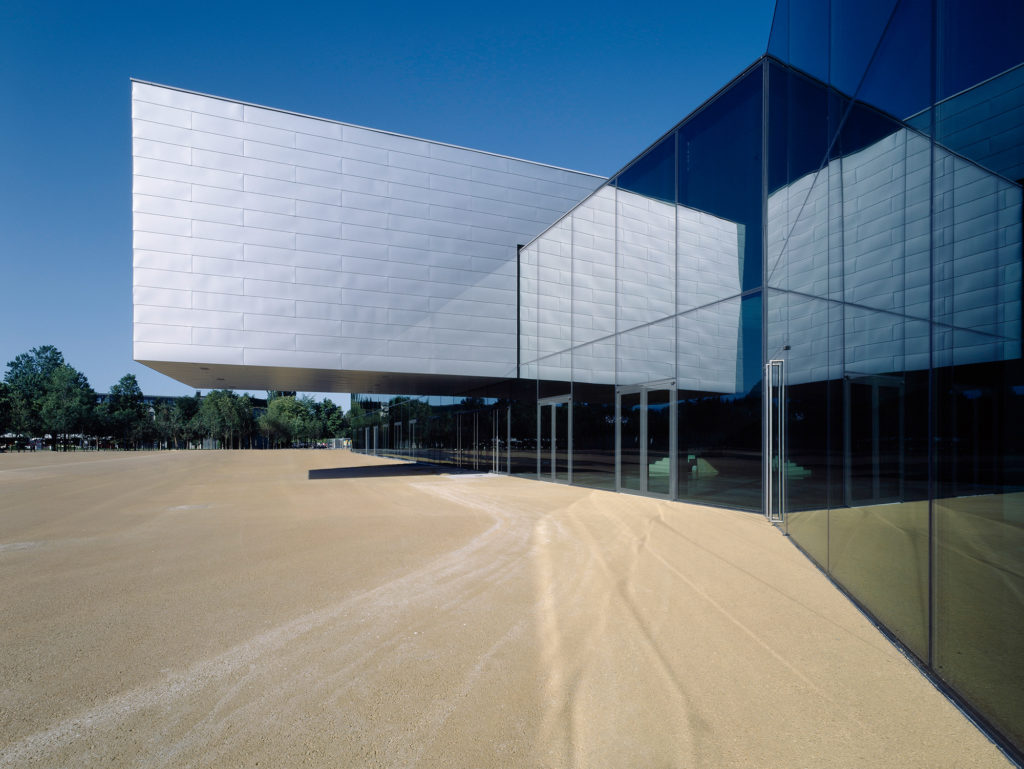 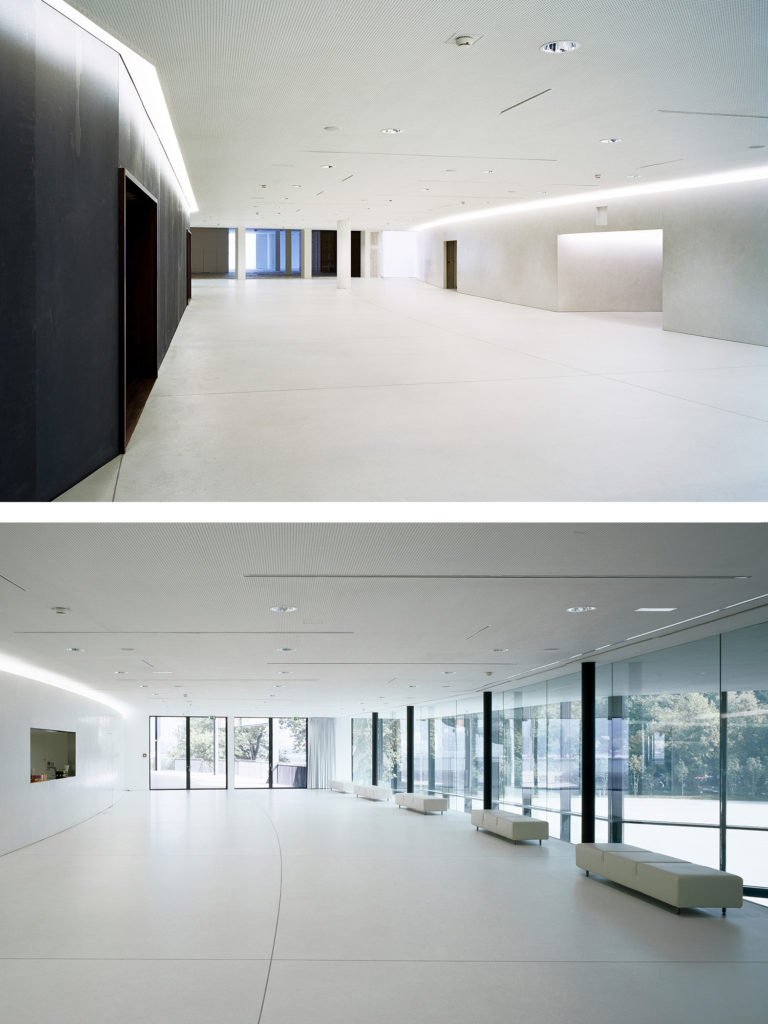 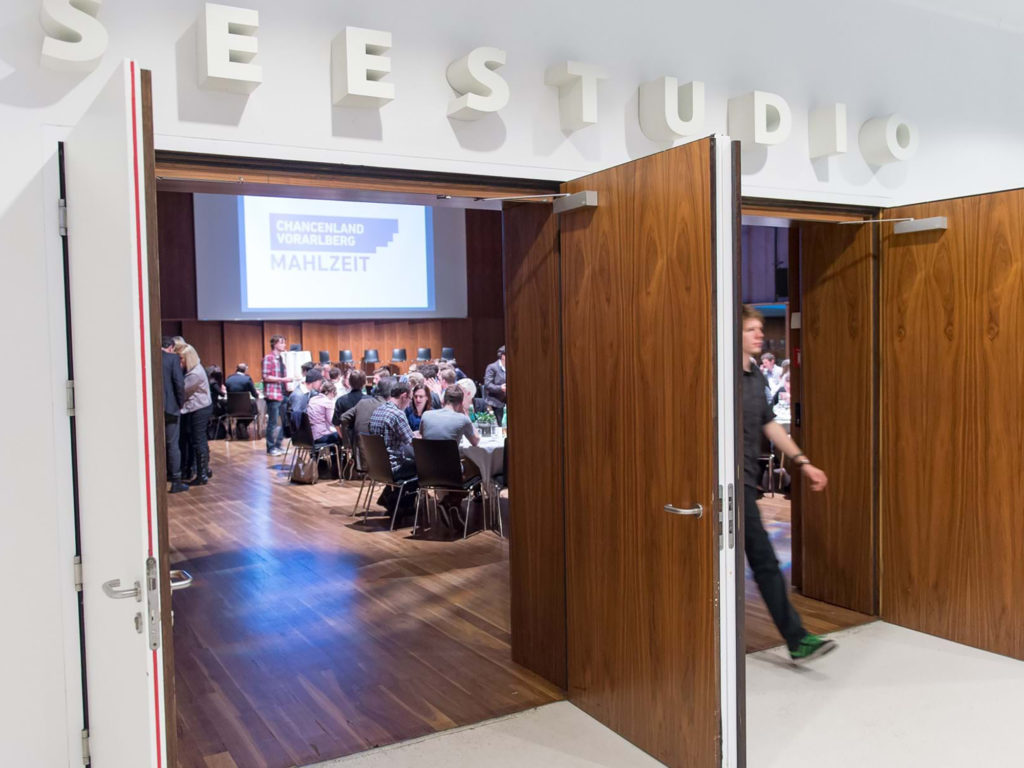 The historical starting point for the Festspielhaus was the Seebühne (Lakeside Stage), which was expanded to 7,000 seats (the world’s largest open-air theater) and supplemented with a roofed lounge. It now also includes a theater hall for an audience of 1,800 as well as a lakeside Studio. 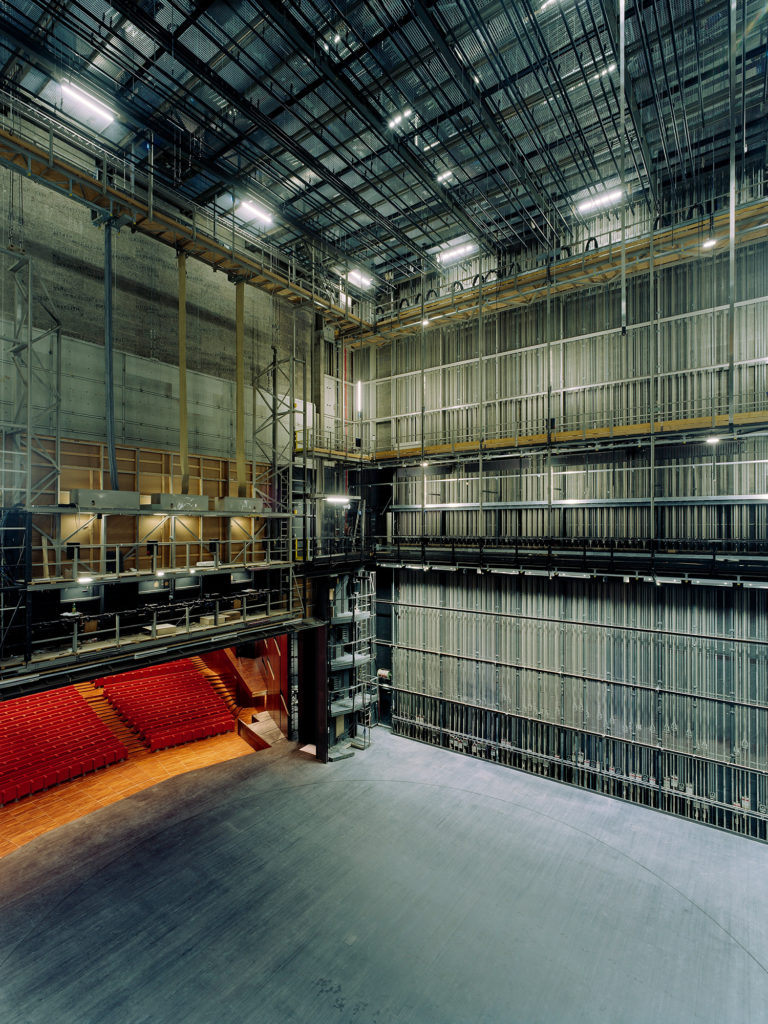 Behind the Großer Saal (Great Hall), the flytower perches between the girder construction and the foyer prism. It enables to set off compo¬nents such as curtains, lights, scenery and stage effects into the fly loft above the stage. The main auditorium was totally rehabilitated with new seating and acacia wooden walls that contribute to the warm theatrical atmosphere while enhancing acoustical resonance. We also added a new 600-seat gallery, a suspended stainless steel ceiling and state-of-the-art technology, including innovative guides for the hearing and sight impaired. The auditorium, like the building as a whole, is barrier free. 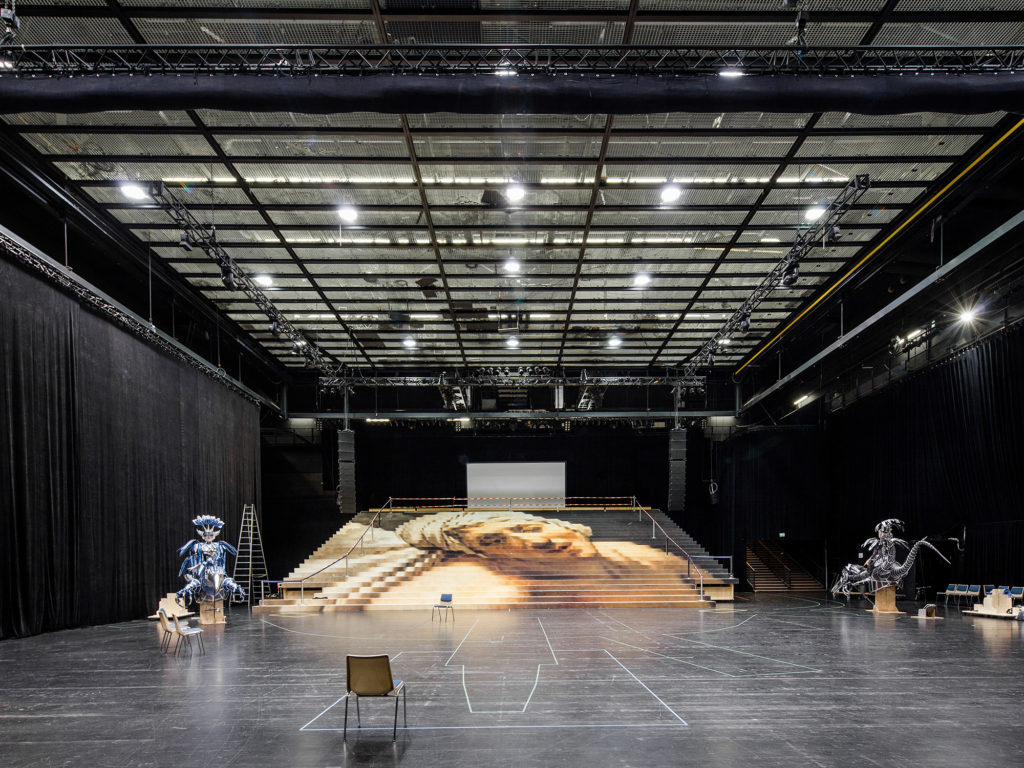 The spacious cube-shaped structure of the workshop stage is situated at the back of the building, offering the largest flexibly expandable unprogrammed performance space in the region. The sophisticated roof structure is equipped with a suspended drawing floor, beneath which a mobile Z-bridge for lighting and lifting equipment can serve any point in the room.

In 1946, the first festival took place as “Spiel auf dem See” in the gondola harbour. From 1950 on, the largest lake stage in the world was available to the Festspiele with a grandstand seating 6400 people. In 1980, the festival and congress house with 1765 seats, planned by Wilhelm Braun, was opened. It was directly connected to the lake stage so that the performance could be relocated to the inside during bad weather. The rather closed building soon turned out to be too small and did not meet the functional, technical and aesthetic requirements of the world-famous cultural festival. For this reason, an international architectural competition was announced in 1992, which was won by our office that was still very young and almost unknown at the time.

The winning project was realized in two steps: In the first phase, a workshop stage, sea foyer and sea studio as well as an administrative wing were erected by 1997. In the second phase, starting in 2005, the Festspielhaus was refurbished, expanded and redesigned. After completion in 2006, instead of grey concrete, a light-flooded glass facade will receive the guests. The main entrance, Great Hall, foyers, Lake Gallery and forecourt were redesigned and the house was opened to the lake. Around half of the renovation budget of 40 million euros was invested in the building’s technical equipment. It is now the largest and most modern event center between Munich and Zurich. 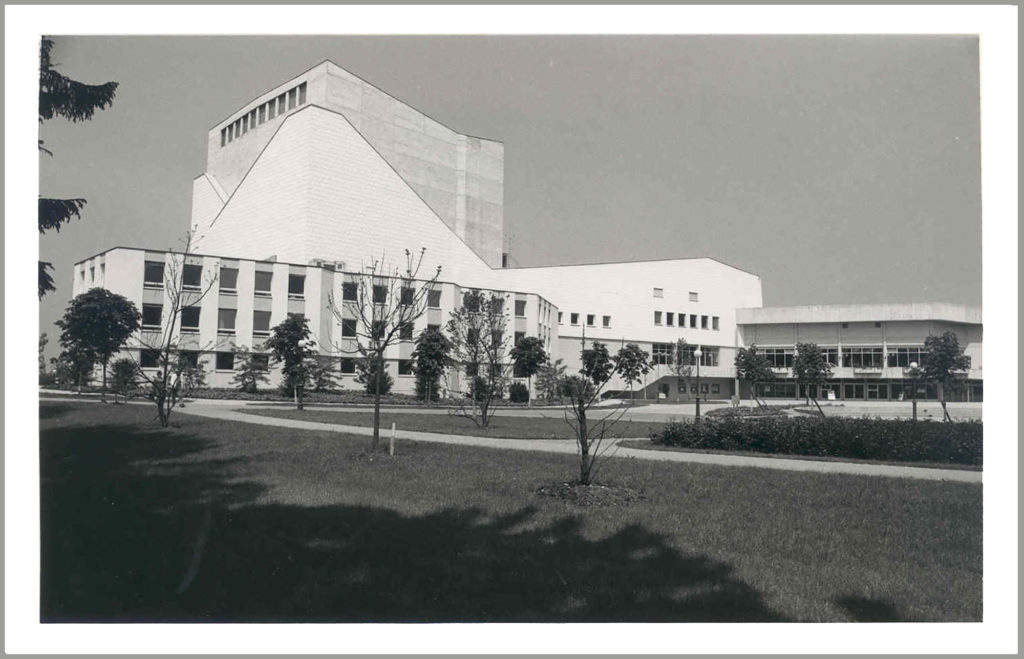 The Festspielhaus designed by Wilhelm Braun before the reconstruction.