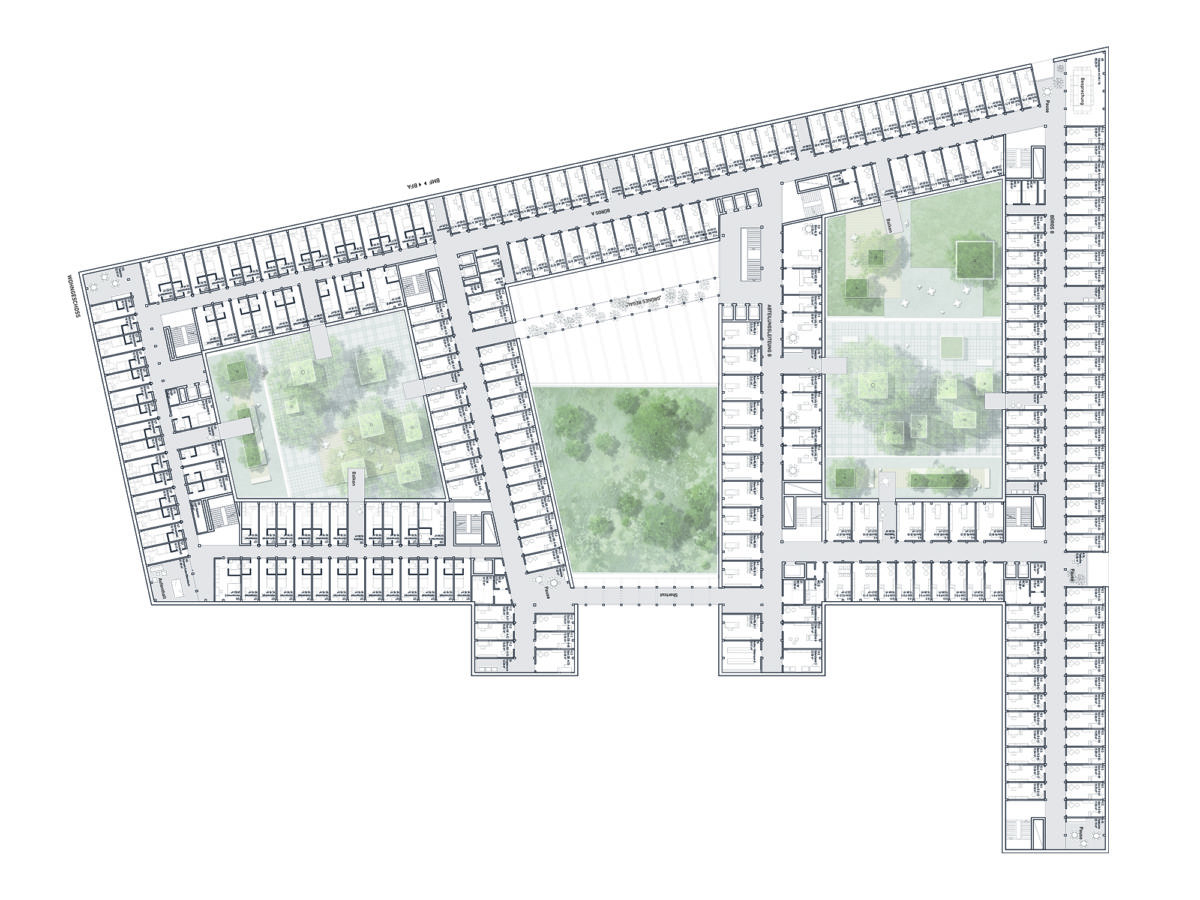 The Federal Ministry of Finance (BMF) is currently spread across seven properties in Berlin. In order to optimise organisational and technical processes and to create modern conference rooms and flexibly usable office space, the functions are to be combined in a new building. In addition, the Federal Finance Academy (BFA) with accommodation units for participants will be housed there, as well as a conference centre and a large canteen.

Urban context
Our building structure takes up the arrangement of the back-to-back courtyards of the Postblock. In contrast to the perimeter development along Leipziger Straße and Wilhelmsstraße, the interior of the block responds to the existing development and continues it. The south-eastern edge of the building recedes in order to preserve the prominent tree in the Generalpostgarten. Two large inner courtyards create a green inner world with the highest quality of stay in contrast to the Berlin urban space.

Building structure
The courtyard structure of the Postblock area is also continued inside. The central entrance hall with visitor, conference and press centre forms the heart of a transparent public authority. The academy to the south and the Ministry of Finance form a unit as two addresses under one roof and are accessed jointly via Wilhelmstraße. The arcade, the glazed refectory and the column filter in the entrance area of the Federal Finance Academy provide views of the tree landscape of the inner courtyards. In addition to the recreational aspect, the green islands also play an important role in the climate balance of a sustainable city. Two sunny roof gardens on the 5th floor offer the building’s users plenty of space for meeting and communicating, but also decelerated quiet areas for undisturbed lingering. The topmost roof surfaces of the building are entirely extensively greened and 40 to 50 percent are equipped with a PV system.

Construction
The supporting structure consists of a hybrid reinforced concrete and timber construction. The basement, the ground floor and parts of the first floor are built in reinforced concrete. Above this, a timber structure made of prefabricated modules will be erected. The ribbed ceilings and wooden soffits of the ceilings remain visible and give the house an almost homely character.